Cell adhesion is the process by which cells interact with specific molecules on the cell surface and attach to adjacent cells. This process can occur through direct or indirect interactions between cell surfaces, where the cells attach to the surrounding extracellular matrix, which contains the molecules released by the cells into the space between the cells. Cell adhesion occurs when the cell adhesion molecule (CAM) interacts with a transmembrane protein located on the cell surface. Cell adhesion links cells in different ways and can participate in signal transduction to allow cells to detect and respond to changes in the surrounding environment. Other cellular processes regulated by cell adhesion include cell migration and tissue development in multicellular organisms. Changes in cell adhesion can disrupt important cellular processes and lead to a variety of diseases, including cancer and arthritis. Cell adhesion is also essential for diseases caused by infectious organisms such as bacteria or viruses. 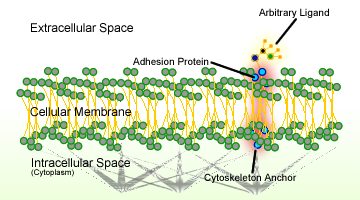 CAMs are divided into four main families: integrins, immunoglobulin (Ig) superfamily, cadherin and selectins. Each of these adhesion molecules has a different function and recognizes a different ligand. Cadherins and immunoglobulins are homotypic CAMs because they bind directly to the same type of CAM on another cell, while integrins and selectins are heterologous CAMs that bind to different types of CAM. Defects in cell adhesion are often attributed to defects in CAMs expression. In multicellular organisms, binding between CAMs causes cells to adhere to each other and form a structure called a cell junction.

According to their functions, the cell junctions can be classified as:

Anchoring junctions (adherens junctions, desmosomes and hemidesmosomes), that maintain cells along and strengthens contact between cells.

Signal-relaying junctions, which might be synapses within the system. 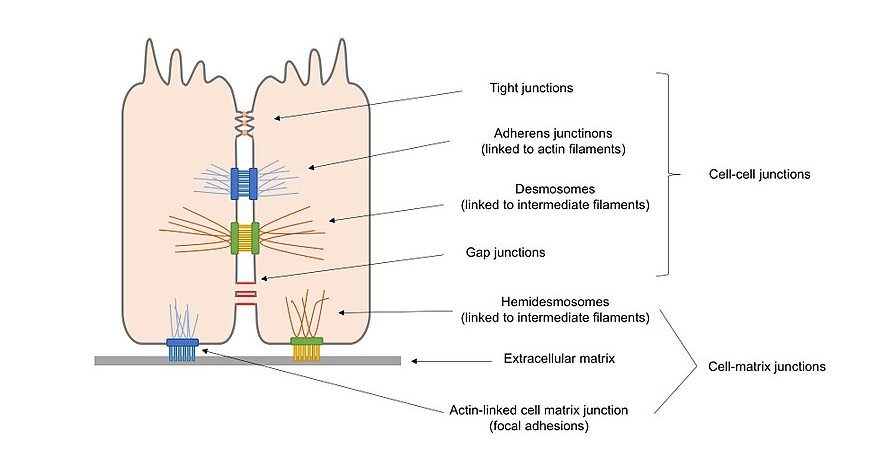 Cell adhesion proteins are usually glycoproteins that mediate cell-cell and cell extracellular matrix recognition at the extracellular surface. Most cell adhesion molecules have similar conformations in their adhesive domains. For example: the adhesive domains of cadherin, Immunoglobulin like, fibronectin type III and EGF are predominantly β-sheet structures. The common motif involved in cell adhesion is the Greek key barrel structure containing one or two anti-parallel β sandwiches.

For example, cadherins are transmembrane Ca2+-dependent homophilic adhesion molecules. Cadherins are responsible for maintenance of the junctions between similar cells in tissues. Cell-cell adhesion is mediated through the N-terminal domain of the cadherins. It contains five similar extracellular domains EC1 to EC5. X-ray crystallographic studies in N-cadherin showed that EC1 domain forms a dimer, in which the monomers are oriented in parallel with their adhesive binding surface pointing outward from the plasma membrane. The monomer units of EC1 domains interact with each other in an antiparallel way, using their adhesive binding surfaces and forming a β-barrel structure. A putative interface of the interaction was suggested to have both hydrophobic and polar/charged character that mimics the interface of the interaction of immunoglobulin domains with one another in the Ig superfamily.

For example, binding of the integrins to various cell surface receptors and extracellular matrix ligands is a major class of heterophilic protein-protein interaction in cell adhesion systems. Upon binding to soluble fibrinogen, the integrin αIIbβ3 is converted to a high affinity binding state. The conformational changes of the integrin induced by ligand binding in this case are critical for its adhesive activity. Binding of a T-cell receptor can also modulate the binding affinity of the integrin, leukocyte function associated antigen- 1 (LFA-1), to its receptors such as ICAM-l or ICAM-2 (intercellular cell adhesion molecule). Binding of ICAM-l can further induce conformational changes of LFA-1. The adhesive binding site of the protein is located in the C-terminal of LFA-l based on X-ray crystallographic study.A tripeptide, arginine-glycine-aspartic acid (RGD), is a common integrin ligand binding motif. For example, the integrin binding ligand type III module of fibronectin has a Greek key barrel structure, whose RGD motif, located at the apex of the loop connecting F and G β strands, mediates adhesion. Straightening of the RGD-loop into a more linear fluctuating conformation by unfolding reduces the accessibility of the loop to the surface bound integrins, and therefore decreases the affinity and selectivity of binding.