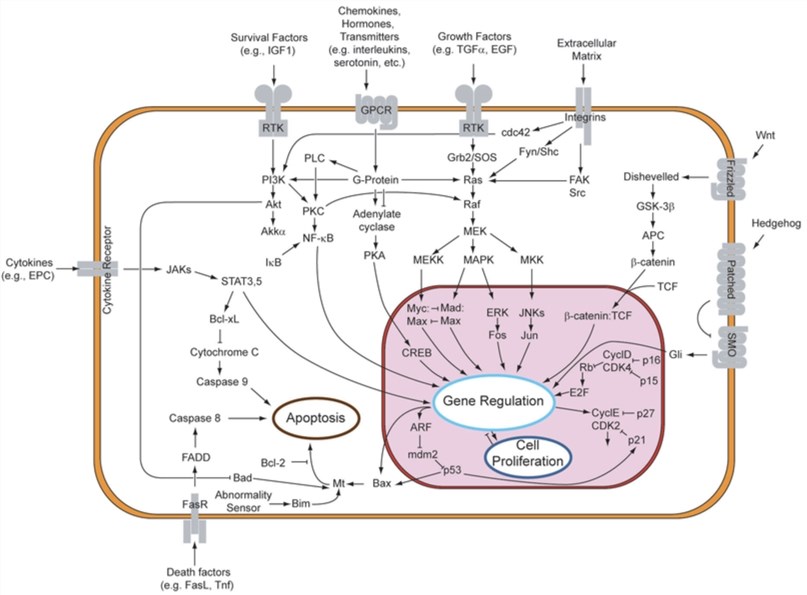 Hedgehog (Hh) signaling molecule is a localized protein ligand secreted by signaling cells with a small range of action, generally no more than 20 cells. In many developmental processes of spine and invertebrates, Hedgehog signaling pathway controls cell fate, proliferation and differentiation. When this signaling pathway is abnormally activated, it will cause tumor occurrence and development. This signaling protein induces different cell fates depending on the concentration of Hh signaling molecules. Like other morphogens, its production is strictly controlled in time and space. Hedgehog is synthesized and secreted in the form of a precursor in the cell, and then undergoes autocatalytic degradation outside the cell, and then undergoes cholesterolation and palmitoylation at different N-terminal amino acid residue positions, thereby Restrict its diffusion and increase its affinity with the plasma membrane. 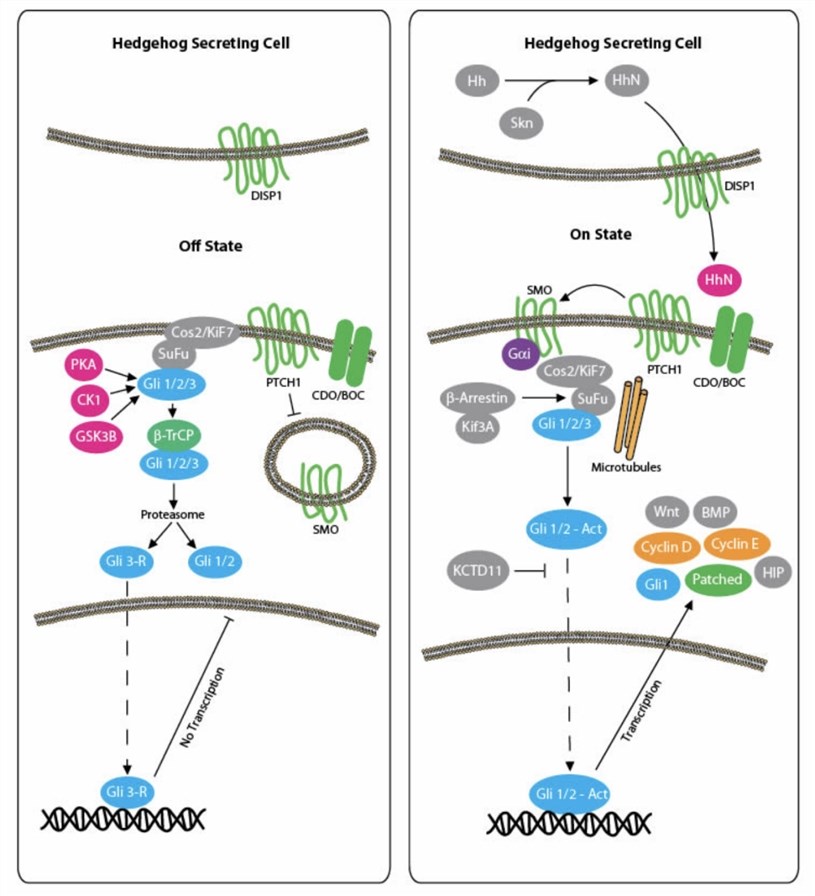 Figure 2. The hedgehog pathway is responsible for regulating and coordinating cell growth and development in the embryo. Under specific time or position-dependent stimulation, the cells secrete the ligands of the hedgehog family, and their binding allows the patch receptor to be repaired and smoothed to bind to the primary cilia. This combination releases Gli, which translocates to the nucleus and triggers the expression of various transcription factors to promote cell growth. Ultimately, the hedgehog signaling pathway is the basis of normal embryonic development, and defects have been associated with certain types of cancer. (From novusbio)

There are three Hedgehog homologous genes in mammals: SonicHedgehog (SHH), Indian Hedgehog (IHH) and Desert Hedgehog (DHH), encoding Shh, Ihh and Dhh proteins, respectively. Hh protein family members are composed of two domains: amino-terminal domain (Hh-N) and carboxy-terminal domain (Hh-C), where Hh-N has the signal activity of Hh protein, while Hh-C has its own Proteolytic enzyme activity and cholesterol transferase function. The Hh precursor protein is split into two parts, Hh-N and Hh-C, in the endoplasmic reticulum by self-catalysis, in which Hh-C covalently binds cholesterol molecules and transfers them to the carboxyl end of Hh-N, followed by acyl transfer The cysteine at the amino terminus of Hh-N undergoes palmitoylation under the action of an enzyme. Only through these post-translational modifications can the Hh protein be fully functional.

Hh signaling is controlled by the two receptors Patched (Ptc) and Smoothened (Smo) on the target cell membrane. The receptor Ptc is encoded by the tumor suppressor gene Patched. It consists of a single peptide chain of 12 transmembrane regions. It can directly bind to the ligand and negatively regulate Hh signaling. The receptor Smo is encoded by the proto-oncogene Smothened and is homologous to the G protein-coupled receptor. It consists of a single peptide chain of 7 transmembrane regions. The N-terminus is located outside the cell and the C-terminus is located inside the cell. The amino acid sequence of the transmembrane region is highly Conservative, the C-terminal serine and threonine residues are phosphorylated sites, and protein kinases bind to phosphate groups when catalyzed. Members of this protein family only have the function of a transcription promoter when they maintain full length, and initiate the transcription of downstream target genes; when the carboxyl end is hydrolyzed by the proteasome, a transcription repressor is formed to inhibit the transcription of downstream target genes. Smo is a receptor necessary for Hh signaling. In the absence of Hh and Ptc, the activation of Smo can lead to the activation of Hh target genes; when the Smo gene is mutated, the same characteristics as the Hh gene mutation can occur.

Previous studies have shown that a regulatory protein called Shh (Sonic hedgehog) controls the activity of genes involved in brain development. The researchers also know that Shh plays a role in promoting the expansion of neural stem cells. However, the precise function of Shh in regulating stem cell self-renewal is not yet known. In the new study, the researchers invented a genetic technology that allows researchers to label neural stem cells of adult mice that respond to Shhn signals at any point in time, and thus can analyze stem cells that respond to Shh. It has been shown that transient Shh signal pulses can cause neural stem cells to expand and generate new neurons.

Figure 3.SHH binding of patched homolog protein (PTCH) regulates downstream signaling due to the interactions between PTCH and Smoothened (SMO). Structure of SHH. (From Biology)

IHH was cloned by PCR of human genomic DNA using degenerate primers based on the constant region of exon 2 of the hedgehog gene of several species, and then screening human fetal lung cDNA libraries from 20 to 26 weeks. The deduced protein contains 336 amino acids. The N-terminal half of IHH and SHH are 91.4% identical, but their C-terminal half is quite different. Northern blot analysis detected 2.7 kb IHH transcription in adult liver and kidney. In situ hybridization of fetal organs in mid-pregnancy detected IHH in the fetal lung, which is localized to the original epithelial and inferior mesenchyme of the developing airway, similar to the expression of SHH. IHH was not detected in the intestine, liver, heart, placenta or kidneys of the fetus. The researchers also found a strong expression of Ptch1 in the developing skull suture. Ihh expression was detected in the same area, but the expression intensity was much weaker than that seen in the humerus and femoral growth plate cartilage of the transgenic embryo in the reporter gene study. 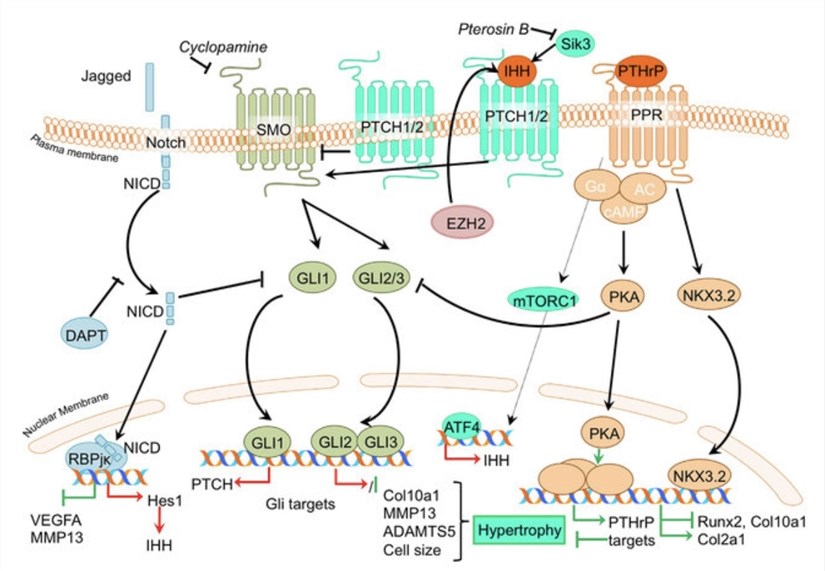