What is Energy Metabolism？

Energy metabolism means the processes that food intake, burning the food to release energy, and storing the excess. In other words, it refers to all the reactions which generate adenosine triphosphate (ATP) from nutrients, including aerobic respiration (oxygen present), anaerobic respiration (fermentation) as well as fatty acid and amino acid metabolism. These processes typically shown as complex cellular metabolic pathways, classified into catabolic or anabolic. These processes are the source of energy at the cellular level. Energy is required for the organs to function normally in the body. Many tissues can use fat or protein as an energy source but some other tissues, such as the brain and red blood cells, can use glucose only. Therefore, the metabolism of glucose is the most basic and essential metabolic process in body (Fig.1). Mitochondria plays a central role in the energy metabolism，called "powerhouses" of the cell. Over 95% of eukaryotic cell's energy (ATP) produced by mitochondria through oxidative phosphorylation to support cellular activity. Therefore, proteins involved in energy metabolism are mostly mitochondrial protein. 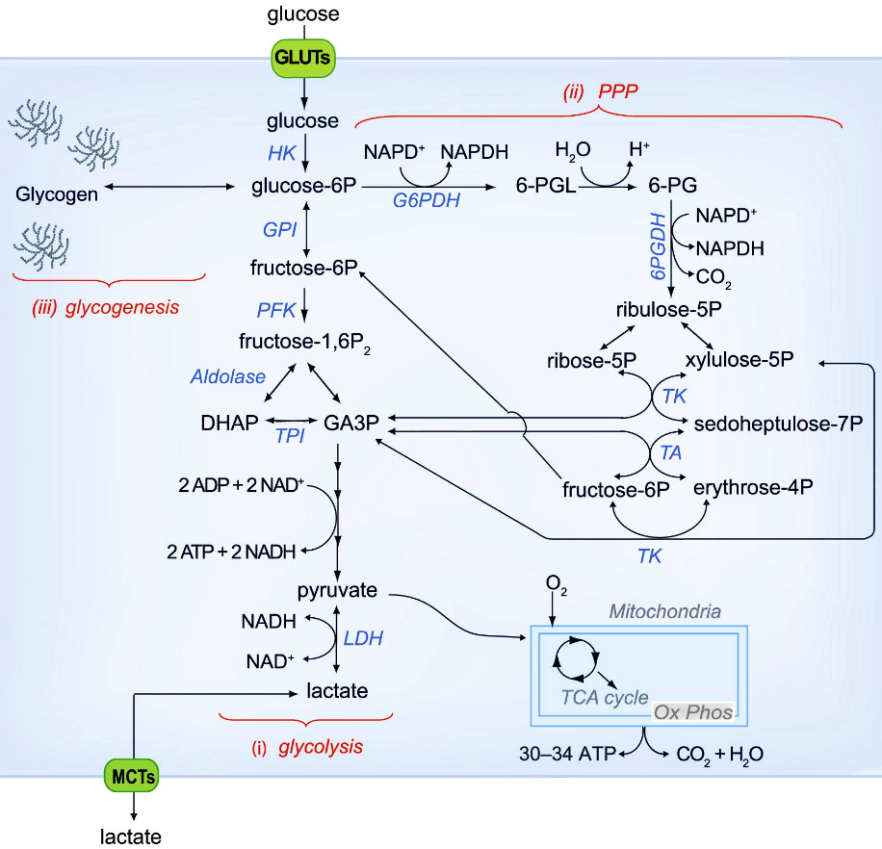 Some proteins play essential roles in cell death or survival modulate nutrient and energy metabolism. Many BCL-2 (B cell lymphoma 2) proteins reside at mitochondria or translocate to mitochondria. BCL-2 proteins are related to utilization of carbon substrate at the level of mitochondrial fuel choice, electron transport, and metabolite import, irrelevant from their cell death regulation. 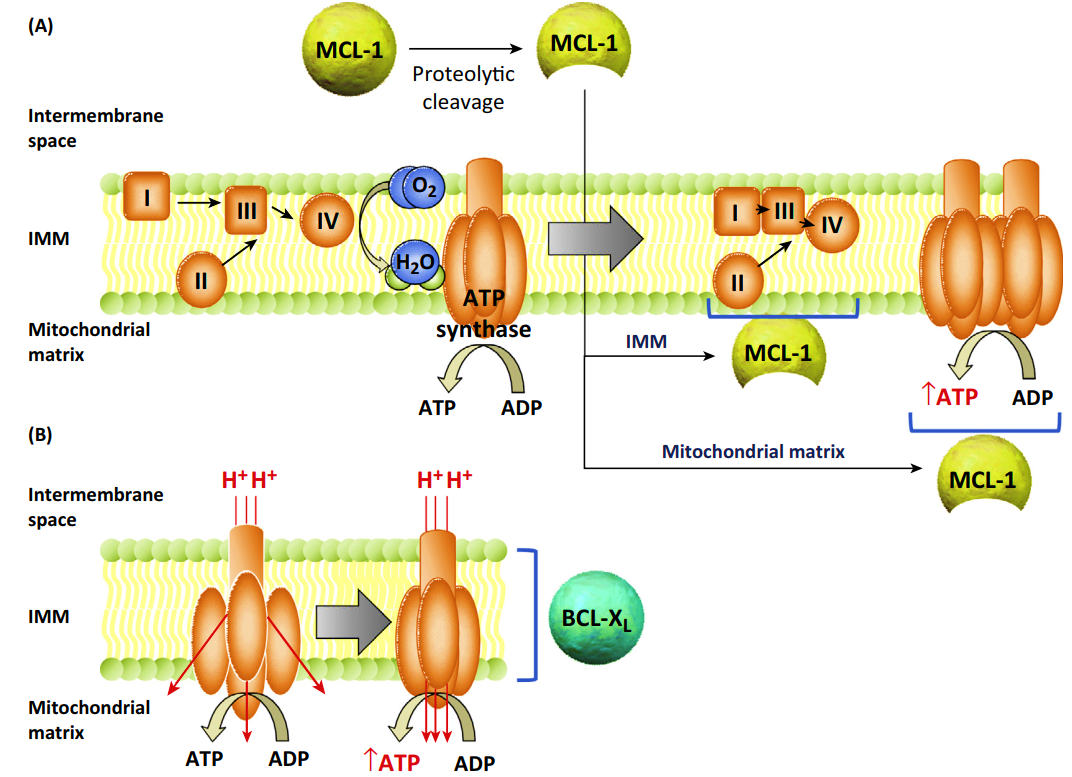 Figure 2. The role of BCL-2 family in oxidative phosphorylation.  (A) The MCL-1 protein undergoes proteolytic cleavage to produce a 36 kDa isoform that is imported into mitochondria, where it is tethered to the inner mitochondrial membrane (IMM) and exposed to the mitochondrial matrix. Within the IMM, cleaved MCL-1 helps to stabilize the assembly of large respiratory supercomplexes composed of complexes I, III, and IV that have higher functional efficiency. In addition, the matrix-targeted cleaved form of MCL-1 promotes oligomerization of mitochondrial ATP-synthase and increased efficiency of ATP synthesis. (B) A small amount of BCL-XL resides in the IMM, where it interacts with the b-subunit of the ATP synthase complex. This may stabilize ATP synthase and increase the efficiency of coupling between the proton gradient and ATP synthesis.

Links Between Energy Metabolism and Redox Signaling in Mitochondria

The main function of mitochondria is to metabolize or break down carbohydrates and fatty acids in order to generate energy, and it’s function mainly relies on redox reactions. Electrons released from nutrients are to form NADH and NADPH, electron carriers have similar structures but with different functions. NADH used for ATP production and also generates reactive oxygen species (ROS), superoxide and hydrogen peroxide (H2O2). ROS production drived by NADH is counterbalanced by NADPH which keeps antioxidants in an active state. Mitochondria rely on a redox buffering system contains reduced glutathione (GSH) and peroxiredoxins (Prx) to quench ROS which generated by nutrient metabolism. When H2O2 is quenched, NADPH is expended to reactivate antioxidant networks and reset the redox environment. Thus, the mitochondrial redox environment is in a constant state of flux reflecting changes in nutrient and ROS metabolism. Changes in redox environment can modulate protein function through oxidation of protein cysteine thiols. Typically, cysteine oxidation is considered to be mediated by H2O2 which oxidizes protein thiols (SH) forming sulfenic acid (SOH). Formation of SOH is slow and not specific, and once formed SOH reacts rapidly with a variety of molecules. By contrast, protein S-glutathionylation (PGlu) reactions involve the conjugation and removal of glutathione moieties from modifiable cysteine residues. PGlu reactions are driven by fluctuations in the availability of GSH and oxidized glutathione (GSSG) and thus should be exquisitely sensitive to changes ROS flux due to shifts in the glutathione pool in response to varying H2O2 availability.

PGlu may control nutrient delivery into mitochondria or carbon entry into oxidative pathways in three aspects; (i) carnitine/acyl-carnitine translocase (CACT); (ii) Ogdh, a major site of carbon entry into the Krebs cycle from amino acid catabolism/oxidation and (iii) Pdh, the main control site for oxidation of carbohydrate-derived carbon, which could control mitochondrial bioenergetics at the level of substrate supply but could also modulate generation of ROS (Fig. 3). 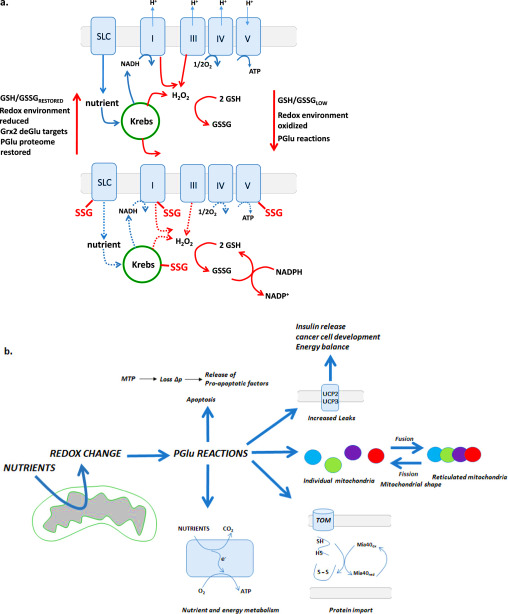 Figure 3. The S-glutathione reaction of protein links the changes of metabolism and controls the protein by redox signal. A. The production of NADH and H2O2 was changed by regulating the absorption or oxidation of nutrients directly. This leads to the spatiotemporal fluctuation of the redox state of mitochondrial redox buffer system (mainly GSH), and then uses this signal to send the redox environmental state signals to the proteins involved in various processes in the whole mitochondria. Signals are mediated by direct covalent modifications of various proteins that control the shape of mitochondria, protein introduction, and other cellular processes, such as cell division, mechanical movement of muscle cells, vascular, cardiac and nervous system development, and many other possible processes. Protein S-glutathione acylation also feeds back to mitochondria to control nutrient uptake, metabolism, electron flux and ROS production. This eventually changed the bioenergy characteristics of mitochondria, led to the overall slow down of oxidation reaction and limited the electronic supply of NADH and H2O2. Due to the decrease of ROS formation and the provision of NADPH, mitochondrial redox buffer system can be restored, thus the redox environment is restored, and finally the reverse of S-glutathione reaction of protein is promoted, thus the redox reaction of nutrients is restored. B. Effects of mitochondrial PGlu reaction and redox environment on cell physiology.