Estrogen receptors (ERs) are members of the nuclear receptor superfamily and are closely related to women’s health. Estrogens are a group of compounds named for their importance in the reproductive system, and they are involved in various processes of the reproductive system. The majority of estrogen activity in the body is mediated by ERs. ERs are ligand-induced intracellular transcription factors that regulate the levels of estrogen in most organisms. In humans, ERs are expressed in many cells and tissues but mainly expressed in the reproductive system, such as in the breasts, uterus, and ovaries. It has been reported that the vast majority of female breast cancers are positive for ERα, which suggests a significant role for this steroid hormone receptor in tumor development and progression. Like most members of the nuclear receptor family, ERs exert biological effects mainly through the endogenous estrogen estradiol, and its natural ligand is estradiol-17β (E2). 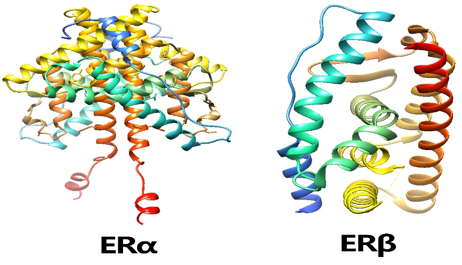 Once activated by estrogen, the ER is able to translocate into the nucleus and bind to DNA to regulate the activity of different genes (i.e. it is a DNA-binding transcription factor). However, it also has further functions independent of DNA binding. As hormone receptors for sex steroids (steroid hormone receptors), ERs, androgen receptors (ARs), and progesterone receptors (PRs) are necessary in sexual maturation and gestation.

There are two different types of the estrogen receptor, usually remarked as α and β, each encoded by a separate factor (ESR1 and ESR2, respectively). Hormone-activated estrogen receptors form dimers, and, since the two forms are coexpressed in various cell types, the receptors may form ERα (αα) or ERβ (ββ) homodimers or ERαβ (αβ) heterodimers. Estrogen receptor alpha and beta show vital overall sequence similarity, and both are composed of five domains designated A/B through F (listed from the N- to C-terminus; amino acid sequence numbers consult with human ER). The N-terminal A/B domain can transactivate gene transcription in the absence of bound ligand (e.g., the estrogen hormone). whereas this region will activate gene transcription in the absence of ligand, this activation is weak and more selective compared to the activation provided by the E domain. The C domain, also refer to as the DNA-binding domain, binds to estrogen response elements in DNA. The D domain is a hinge region that connects the C and E domains. The E domain contains the ligand binding cavity as well as binding sites for coactivator and corepressor proteins. The E-domain in the presence of bound ligand is able to activate gene transcription. The C-terminal F domain function is not completely clear and is variable in length.

The ER's helix 12 domain plays a vital role in determining interactions with coactivators and corepressors and, therefore, the specific agonist or antagonist effect of the ligand.

Different ligands have different affinity for alpha and beta isoforms of the estrogen receptor:

Estradiol have equally binding affinity to both receptors.

Estrone, and raloxifene tend to bind preferentially to the alpha receptor.

Estriol, and genistein to the beta receptor.

Subtype selective estrogen receptor modulators preferentially bind to either the α- or the β-subtype of the receptor. Additionally, the various kinds of estrogen receptor combinations may respond differently to various ligands, which may translate into tissue selective agonistic and antagonistic effects. It has been suggested that the ratio of alpha- and beta-subtype concentrations plays a role in certain diseases. The concept of selective estrogen receptor modulators is based on the ability to promote the interaction of ER with different proteins such as transcriptional coactivators or co-repressors. Furthermore, the ratio of coactivator to corepressor protein varies in different tissues. As a consequence, the same ligand may be an agonist in some tissue (where coactivators predominate) while antagonistic in other tissues (where corepressors dominate). Tamoxifen, for example, is an antagonist in breast and is, therefore, used as a breast cancer treatment but an ER agonist in bone (thereby preventing osteoporosis) and a partial agonist in the endometrium (increasing the risk of uterine cancer).