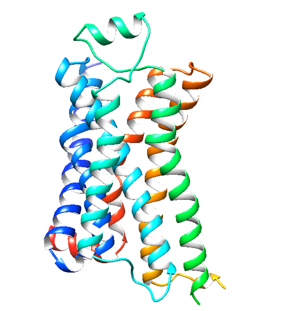 When a ligand binds to the GPCR it causes a conformational change in the GPCR, which allows it to act as a guanine nucleotide exchange factor (GEF). The GPCR can then activate an associated G protein by exchanging the GDP bound to the G protein for a GTP. The G protein's α subunit, together with the bound GTP, can then dissociate from the β and γ subunits to further affect intracellular signaling proteins or target functional proteins directly depending on the α subunit type (Gαs, Gαi/o, Gαq/11, Gα12/13).

The exact size of the GPCR superfamily is unknown, but at least 810 different human genes (or ~ 4% of the entire protein-coding genome) have been predicted to code for them from genome sequence analysis. Although numerous classification schemes have been proposed, the superfamily was classically divided into three main classes (A, B, and C) with no detectable shared sequence homology between classes.

The largest class by far is class A, which accounts for nearly 85% of the GPCR genes. Of class A GPCRs, over half of these are predicted to encode olfactory receptors, while the remaining receptors are liganded by known endogenous compounds or are classified as orphan receptors (Figure 2). Despite the lack of sequence homology between classes, all GPCRs have a common structure and mechanism of signal transduction. The very large rhodopsin A group has been further subdivided into 19 subgroups (A1-A19).

According to the classical A-F system, GPCRs can be grouped into 6 classes based on sequence homology and functional similarity:
Class A (or 1) (Rhodopsin-like)
Class B (or 2) (Secretin receptor family)
Class C (or 3) (Metabotropic glutamate/pheromone)
Class D (or 4) (Fungal mating pheromone receptors)
Class E (or 5) (Cyclic AMP receptors)
Class F (or 6) (Frizzled/Smoothened)

More recently, an alternative classification system called GRAFS (Glutamate, Rhodopsin, Adhesion, Frizzled/Taste2, Secretin) has been proposed for vertebrate GPCRs. They correspond to classical classes C, A, B2, F, and B.

An early study based on available DNA sequence suggested that the human genome encodes roughly 750 G protein-coupled receptors, about 350 of which detect hormones, growth factors, and other endogenous ligands. Approximately 150 of the GPCRs found in the human genome have unknown functions. Some web-servers and bioinformatics prediction methods have been used for predicting the classification of GPCRs according to their amino acid sequence alone, by means of the pseudo amino acid composition approach. 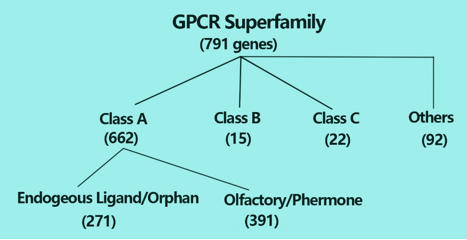 GPCRs are integral membrane proteins that possess seven membrane-spanning domains or transmembrane helices. The extracellular parts of the receptor can be glycosylated. These extracellular loops also contain two highly conserved cysteine residues that form disulfide bonds to stabilize the receptor structure. Some seven-transmembrane helix proteins (channelrhodopsin) that resemble GPCRs may contain ion channels, within their protein. In 2000, the first crystal structure of a mammalian GPCR, that of bovine rhodopsin (1F88​) was solved. In 2007, the first structure of a human GPCR was solved this human β2-adrenergic receptor GPCR structure proved highly similar to the bovine rhodopsin. The structures of activated or agonist-bound GPCRs have also been determined. These structures indicate how ligand binding at the extracellular side of a receptor leads to conformational changes in the cytoplasmic side of the receptor. The biggest change is an outward movement of the cytoplasmic part of the 5th and 6th transmembrane helix (TM5 and TM6). The structure of activated beta-2 adrenergic receptor in complex with Gs confirmed that the Gα binds to a cavity created by this movement.

GPCRs are evolutionarily related to some other proteins with seven transmembrane domains, such as microbial rhodopsins and adiponectin receptors 1 and 2 (ADIPOR1 and ADIPOR2). However, these 7TMH (7-transmembrane helices) receptors and channels do not associate with G proteins. In addition, ADIPOR1 and ADIPOR2 are oriented oppositely to GPCRs in the membrane (GPCRs usually have an extracellular N-terminus, cytoplasmic C-terminus, whereas ADIPORs are inverted).

The visual sense: The opsins, gradually evolved from early GPCRs over 650 million years ago, use a photoisomerization reaction to translate electromagnetic radiation into cellular signals. Rhodopsin, for example, uses the conversion of 11-cis-retinal to all-trans-retinal for this purpose.

The gustatory sense (taste): GPCRs in taste cells mediate release of gustducin in response to bitter-, umami- and sweet-tasting substances.

Autonomic nervous system transmission: Both the sympathetic and parasympathetic nervous systems are regulated by GPCR pathways, responsible for control of many automatic functions of the body such as blood pressure, heart rate, and digestive processes

Involved in growth and metastasis of some types of tumors.

Used in the endocrine system for peptide and amino-acid derivative hormones that bind to GCPRs on the cell membrane of a target cell. This activates cAMP, which in turn activates several kinases, allowing for a cellular response, such as transcription.