B lymphocyte-2 gene, referred to as bcl-2 (B-cell lymphoma-2), is one of the most important oncogenes in apoptosis research. It is known that the process of apoptosis can be divided into three phases: induction phase, effect phase and degradation phase. During the induction phase, the cells receive various signals to elicit various effects; after entering the effector phase, the cells undergo irreversible programmed death through molecular regulatory points that determine cell fate (survival/death), including one The series of proto-oncogenes and the production of oncogenes, the Bcl-2 family plays a decisive role; the degradation phase produces visible apoptosis. The Bcl-2 gene (ie, B cell lymphoma/leukemia-2 gene) is an oncogene that has an inhibitory effect on apoptosis, and some studies in recent years have begun to reveal the mechanism of this effect. 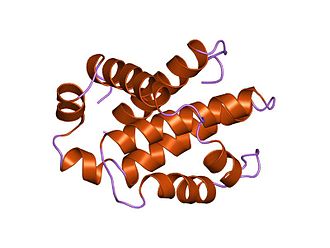 The human bcl-2 gene has two promoters, promoter 1 (promoter1, P1) and promoter 2 (promoter 2, P2). In most cells of the human body, more than 95% of bcl-2 transcription is initiated by P1, which is located about 1.7 kb upstream of the translation initiation point. There is no typical TATA box, and it is rich in GC boxes that can be bound by Sp-1. P1-driven transcription begins primarily near the GC box, which is very similar to the promoters of other housekeeping genes. Analysis of the chromosomal structure of the P1 region indicated that it may be a constitutive promoter. P2 is located about 1.3 kb downstream of the P1 region (about 80 bp upstream of the translation initiation point) and has a typical CCAAT box and a TATA box. Compared with P1, P2 is mainly an inducible promoter, and a small part of bcl-2 transcription is Driven by P2. 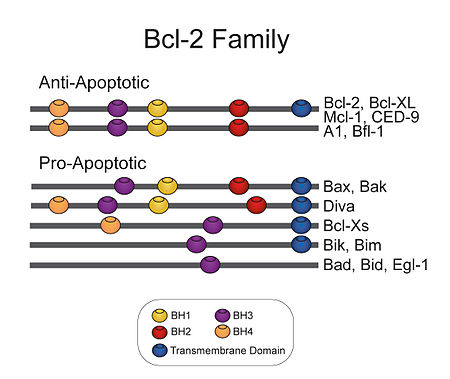 Figure 2. Domains of the Bcl-2 family.

Bcl-2 family members play a crucial role in the process of apoptosis. They have high homology, and there are also conserved domains such as BH1, BH2, BH3, and BH4. The Bcl-2 family can be divided into two categories, one is anti-apoptotic, mainly Bcl-2, Bcl-XL, Bcl-W, Mcl-1, CED9, etc., and the other is cell-promoting, mainly Including Bax, Bak, Bcl-XS, Bad, Bik, Bid, etc. Bcl-2, Bcl-XL, and Mcl-1 are negative regulators of cell death, and protect cells from apoptosis when many types of cells are stimulated by the outside world. They are mainly localized on the cytoplasmic surface, endoplasmic reticulum and mitochondrial outer membrane of the nuclear membrane, and the binding to the membrane is extremely important for its function. Experiments have shown that the anti-apoptotic ability of Bcl-2 protein that loses its membrane localization ability is much weakened. It has been reported that in MDCK cells, Bcl-2 mutants that specifically localize to the mitochondrial membrane have the same function as wild-type, whereas Bcl-2 mutants that localize to the endoplasmic reticulum lose this ability; however, The results of the study on fibroblasts Rat-1/myc have led to the opposite conclusion that Bcl-2 activity localized to the endoplasmic reticulum is much higher than that mapped to the mitochondrial membrane. Therefore, different subcellular localized Bcl-2 mutants may be involved in different apoptotic signaling pathways in different cell types.