Chemokine: A class of small cytokines or signaling proteins secreted by cells. Because they have the ability to induce directed chemotaxis of nearby reactive cells, they are named chemotactic cytokines.

All chemokines are small, with molecular weights between 8 and 10 kDa. About 20-50% of them are identical; that is, they have the same gene sequence and amino acid sequence homology. They also possess conservative amino acids, which are important for forming their three-dimensional or tertiary structure. For example, in most cases, four cysteines interact to form a Greek key shape, which is one of the chemokines features. Intramolecular disulfide bonds usually connect the first to third cysteine residues, and the second to fourth cysteine residues, which are numbered when they appear in the protein sequence of the chemokine. A typical chemokine protein is produced in the form of a peptide precursor, and during its secretion from the cell, a signal peptide of approximately 20 amino acids is cleaved from the active (mature) part of the molecule. In chemokines, the first two cysteines are near the n-terminus of the mature protein, the third cysteine is in the molecular center, and the fourth is near the C-terminus. After the first two cysteines, there is a loop of about 10 amino acids, called the N loop. 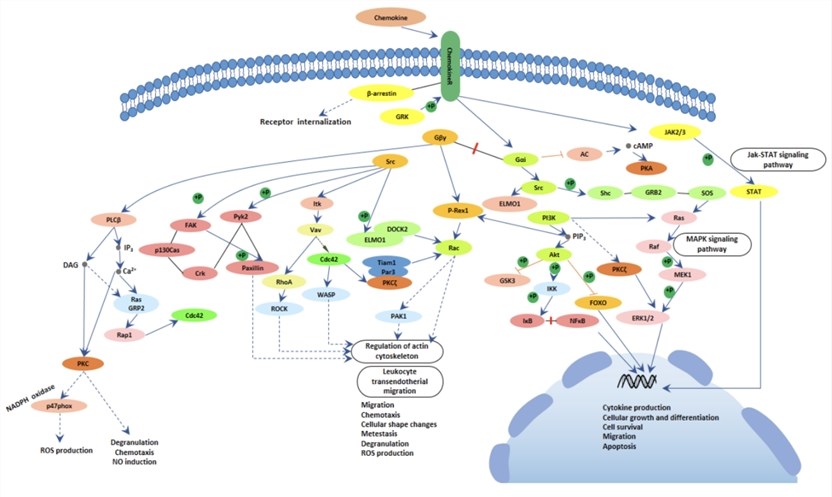 The main role of chemokines is to induce directional migration of cells. Cells attracted by chemokines migrate to the source of chemokines along the signal of increased concentration of chemokines. Some chemokines control the chemotaxis of immune cells during immune surveillance, such as inducing lymphocytes to lymph nodes. The chemokines in these lymph nodes monitor the invasion of pathogens by interacting with antigen presenting cells in these tissues. These are called steady-state chemokines and are produced and secreted without stimulating the source cells. Some chemokines play a role in development; they can stimulate new blood vessel formation (angiogenesis); guide cells into tissues and provide specific signals for cell maturation. The key role of other chemokines in inflammatory response can be released by a variety of cells in response to bacterial and viral infections; it can also be released due to non-infectious stimuli such as silica inhalation and urinary tract stones. Chemokine release is usually caused by stimulation of inflammatory cytokines such as interleukin-1 (IL-1). The main role of inflammatory chemokines is to act as a chemotactic agent for leukocytes, attracting monocytes, neutrophils and other effector cells from the blood to the site of infection or tissue damage. Certain inflammatory chemokines can activate cells to initiate an immune response or promote wound healing. They are released by many different cell types and guide the cells of the natural and adaptive immune systems. 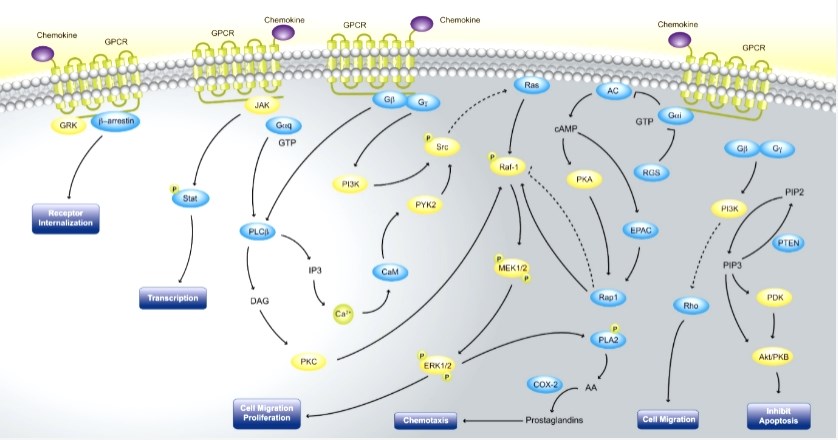 Figure 3. The function of chemokines and their receptors. (From cusabio) 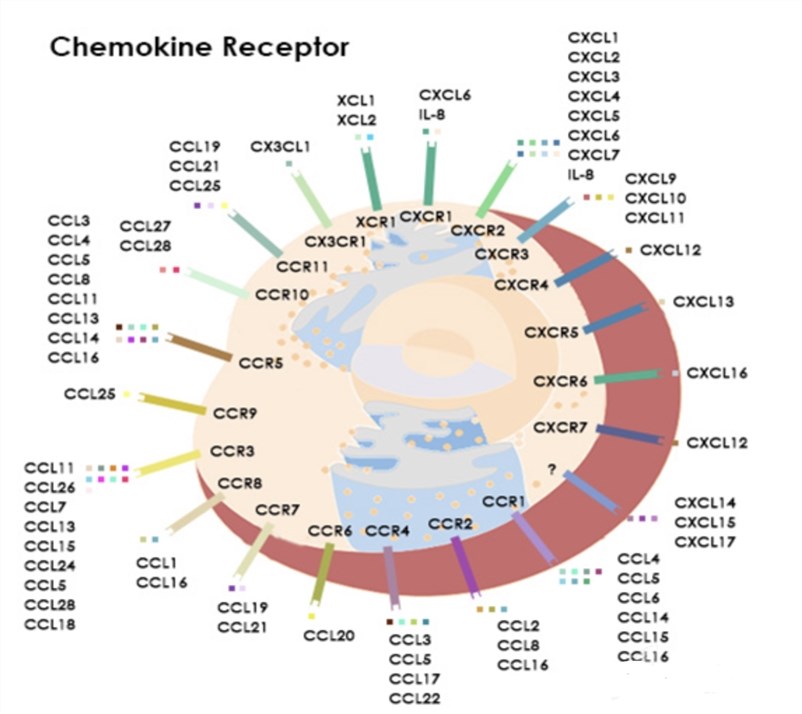 Chemokine receptors are G protein-coupled receptors containing 7 transmembrane domains found on the surface of leukocytes. So far, about 19 different chemokine receptors have been identified. According to the type of chemokine they bind, they are divided into four families: CXCR that binds to CXC chemokines and CC chemokines. CCR, CX3CR1 combined with the only CX3C chemokine (CX3CL1), and XCR1 combined with two XC chemokines (XCL1 and XCL2). They share many common structural features: they are similar in size (about 350 amino acids), have a short acidic N-terminus, 7 helical transmembrane domains, 3 intracellular and 3 extracellular hydrophilic loops, and A cell contains the C-terminus of serine and threonine residues important for receptor regulation. The first two extracellular loop chemokine receptors, each with a conserved cysteine residue, allow these loops to form a disulfide bond. G protein is coupled to the C-terminus of the chemokine receptor, which activates intracellular signaling after the receptor is activated, and the N-terminus domain of the chemokine receptor determines the specificity of ligand binding.