Following viral infection, the human body triggers a complex regulatory system of innate and adaptive immune responses designed to defend against the virus. One of the many responses to the viral invasion is the induction of the pleiotropic cytokines, interferon (IFN). Interferons belong to cytokine proteins. An infected cell will release interferons to protect host cells from several pathogens, such as viruses, parasites and bacteria. Interferons have the specific ability to interfere with viral replication, also activate immune cells (such as macrophages and natural killer cells) and increase host defenses. Interferons are used in the treatment of hepatitis B and C, herpes simplex, many types of cancer and multiple sclerosis. There are more than twenty interferons have been identified which divided among three classes: Type I IFN, Type II IFN, and Type III IFN. In this article, we mainly discuss the type I interferon triggered signal pathway. IFN-α and IFN-β are two typical type I interferons found in most animals, including humans. They are mainly involved in innate immune response against viral infection.

Type I interferons are induced following recognition of pathogen components during infection by various host pattern recognition receptors. Immune cells are able to synthesize IFN-α, IFN-β and other cytokines. There are four main pathways leading to the production of type I interferons. The RLRs pathway is activated by RNA viruses. The cGAS-STING pathway is activated by DNA viruses. The third pathway involves the adaptor protein TRIF which is recruited by TLR3 and TLR4. The last pathway is triggered by TLR7 or TLR8 and TLR9 leading to the activation of the transcription factor IRF7 . Following their production, type I interferons triggered antiviral responses by binding to a common receptor.

Interferons bind to interferon receptors. Type I interferons bind to a specific transmembrane protein complex known as the IFN-α receptor (IFNAR) which consist of IFNAR1 and IFNAR2. The IFNAR1 subunit is associated with tyrosine kinase-2 (TYK2 ) and the IFNAR2 subunit is associated with JAK1 . The JAK proteins can be associated with receptors either possess or lack tyrosine kinase activaties of their own. Following ligand binding, activation of IFNAR1 and IFNAR2 result in dimerization. The dimer is rearranged by auto phosphorylation and activate the downstream proteins, such as signal transducer and activator of transcription (STATs), VAV/GEFs, and IRS12/PI3K.

Type I interferons phosphorylate STAT1 and STAT2 proteins by tyrosine phosphorylation involving TYK2 and JAK1. Following phosphorylation, STAT1 and STAT2 become dimer and associate with IFN regulatory factor 9 (IRF9, or p48) form the transcriptionally activate IFN-stimulated gene factor 3 (ISGF3) complex. The activation of ISGF3 then translocate to the nucleus and is mediated by specific elements named IFN-stimulatory response element (ISRE). The ISRE placed upstream or downstream of reporter genes activate transcription in an IFN-α-dependent manner, and mutations in the most highly conserved parts of the sequence abrogate the response. Most genes that respond to IFN-α have ISRE, usually within 200bp of the transcription start site, which suggests that this sequence is important for transcriptional activation in response to IFN-α. ISRE regulates the expression of most type I IFN-stimulated genes and a few type II IFN-stimulated genes. Besides, phosphorylated STAT1 can generate a homodimer which is able to bind the IFN-γ activated site (GAS) to promote transcription. The STATs-mediated transduction is termed JAK-STAT signal pathway. Pathways other than JAK-STAT are also involved in type I interferon signal pathway such as the mitogen-activated protein kinase (MAPK ) cascade and the phosphatidylinositol 3-kinase (PI3K) pathway. 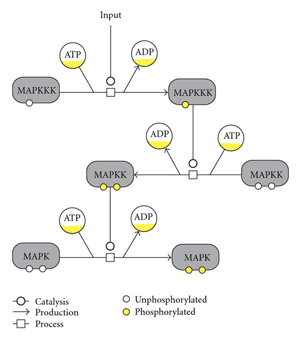 MAPK cascade is a highly conserved module that is involved in many cellular functions, including cell differentiation, proliferation and migration. There are at least three distinctly regulated groups of MAPKs expressed in mammals: amino-terminal kinases (JNK), extracellular signal-related kinases (ERK) and p38 proteins. MAPKs are activated by specific MAPKKs, MAPKK4/7 for JNKs, MEK1/2 for ERK1/2, MAPKK3/6 for the p38. Each MAPKK can be activated by more than one MAPKKK, increasing the complexity and diversity of MAPK signaling. Type I interferons also activate MAPK cascade. Activated JAK1 regulates the phosphorylation of Vav, a guanine nucleotide exchange factor (GEF), or other GEFs. Phosphorylated Vav activate downstream protein Rac1 which further regulate the p38MAPK signal pathway. A MAPK kinase kinase (MAPKKK) is subsequently activated and regulates downstream phosphorylation of the MAPK kinases MAPKK3 and MAPKK6. The MAPK kinases directly phosphorylate p38 which regulates activation of various downstream effectors, including the mitogen and stress activated kinases MSK1 and MSK2. The specific transcription factors cAMP responsive element binding protein (CREB) and Histone-H3 are regulated by p38. 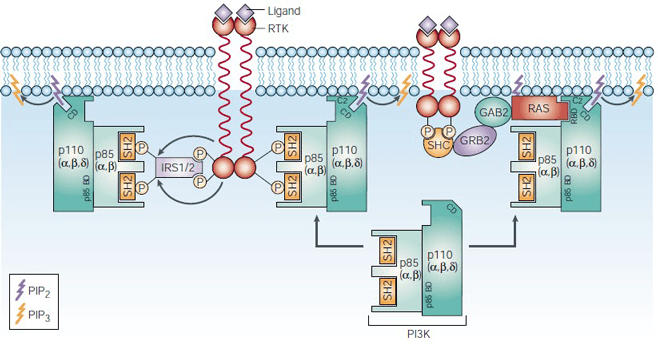 Type I interferon is a class of critical cytokine involving in antivirus, anticancer, and immunoregulation. Recent studies have shown that IFN-α and IFN-β activated classical JAK-STAT signal pathway, MAPK cascade, and PI3K-mTOR signal pathway. There are cross reactions between different signal pathways. To confirm these signal transduction and biologic effect is helpful for understanding the mechanism of action of interferons. Interferons activate the interferon stimulated genes (ISGs) to inhibit viral replication and diffusion, disturb tumor growth and regulate immune systems. Moderate amount of interferons is important for sustaining the stability of the internal environment and resisting the microbial invasion. Research about Interferons triggered signal pathway is always a hot spot. The relationship between related gene polymorphism and disease process has also made certain progress. Cytokine signal transduction is an extremely complex network system. Although some progress have been made, there is no substantive breakthrough. The basic research work will be a challenging research subject in post genome era.