Autophagy is primarily a cytoplasmic degradation process via vacuole or lysosome for coping with various stresses and maintaining cellular homeostasis. This process is highly conserved in eukaryotes. Macroautophagy, microautophagy and chaperone-mediated autophagy are three major autophagic pathways. In macroautophagy (generally called autophagy), a double-membrane vesicle termed autophagosome engulfs cellular constituents (cargoes) such as redundant and damaged organelles and proteins, and fuses with the vacuole membrane, resulting in degradation of cargoes by the lysosomal hydrolases of the vacuole. In microautophagy, the substrates are directly engulfed through invagination of the vacuole membrane. So far, more than 30 autophagy-related genes (ATG) have been found in Saccharomyces cerevisiae. Some of their homologous genes were also identified in filamentous fungi, but their function and mechanism are poorly understood.

Autophagy (Macroautophagy) is a process in which cytoplasmic materials, including organelles and macromer and neurodegenerative diseases. Genetic studies from budding yeast have identified more than 30 ATG genes, which function at various steps during autophagy. Most of these genes are highly conserved from yeast to mammals.

Autophagy (macroautophagy) is an evolutionally conserved self-degradation process found in all eukaryotes, and has now been linked to many developmental processes in filamentous fungi. Currently, increasing evidence indicates that the autophagy-related genes (ATG) of animals and yeasts are associated with a variety of non-autophagic processes such as secretion, signal transduction, and membrane reorganization.

(1) Autophagy induction. It is mainly mediated by ATG1 complexes, including ATG1/ULK1, ATG13 and ATG17/FIP200. At this time, the activity of rapamycin target protein complex 1 (mTORC1) was inhibited, the phosphorylation level of ATG13 was decreased, and the ATG13-ATG1-ATG17 complex formed and initiated the autophagy process.

(2) Vesicle nucleation: Vps34(PI3K)-ATG6(Beclin-1) complex (containing regulatory protein kinase Vps15) acts on nucleation of membranes and mediates pre-autophagosome structure (PAS) formation. ATG12-ATG5, ATG16 multimers, and LC3 can also be recruited, and the expansion and expansion of phagocytic vacuoles are promoted by the latter two.

(3) Elongation: It mainly relies on the binding process of two ubiquitin-based systems, ATG12-ATG5 and the modification process of LC3. They can interact and adjust each other, and both require the participation of ubiquitin-activating enzymes E1 and E2. ATG12 is first activated by ATG7, transported by ATG10 and bound to ATG5, and then combined with ATG16 to generate a multimeric complex of ATG12-ATG5-ATG16. This complex localizes to the outer membrane surface of the preautophagosome structure and is participated in the expansion of the pre-autophagy membrane.

After the formation of the LC3 precursor, it is processed into a cytosolic soluble LC3-I by ATG4., and under the action of ATG7 and ATG3, phosphatidylethanolamine (PE) is covalently linked to form liposoluble LC3-PE (LC3-II), which is involved in the membrane. Extension. LC3-II is commonly used as a marker for autophagy formation and is also an important multi-signal regulatory protein localized to autophagic membranes.

(4) The maturation stage of autophagosomes: autophagosomes form autophagosomes by fusion with lysosomes through the microtubule skeleton under the action of endocytic classification complex (ESCRT) and monomeric GTPase (Rab S). The lysosomal-associated proteins involved include: LAMP1, LAMP2, and UVRAG (UV-resistant tumor suppressor genes). 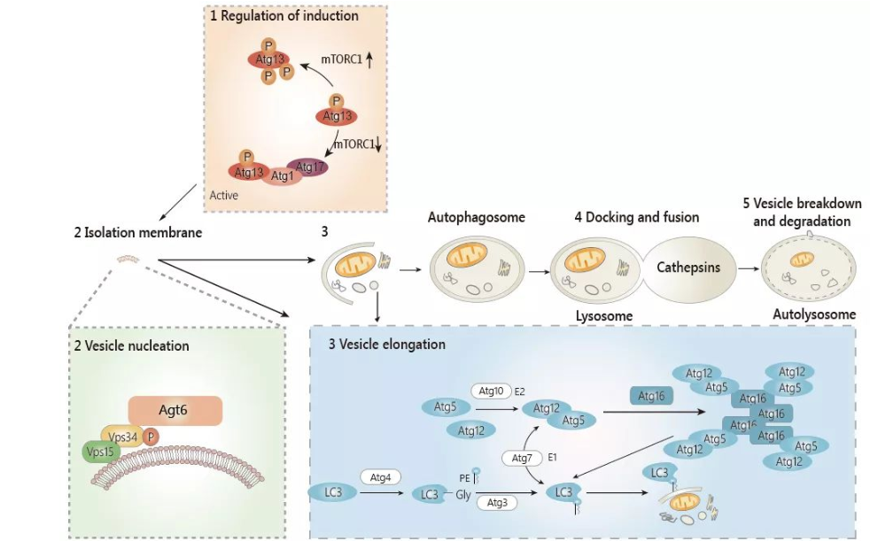