Cellular senescence is a phenomenon in which normal cells stop dividing. In pioneering experiments in the early 1960s, Leonard Hayflick and Paul Moorhead found that normal human fetal fibroblasts were cultured up to about 50 cell populations before aging. This phenomenon is known as "replicating aging," or the Hayflick limit. Hayflick found that normal cells were deadly, overturning the cell biology dogma 60 years ago, and believed that all cultured cells were immortal. Hayflick found that the only immortal cultured cells are cancer cells.

In terms of mechanism, replicative senescence is caused by DNA damage reaction, which is caused by shortening of telomeres during each cell division. In response to elevated reactive oxygen species (ROS), oncogene activation and cell-cell fusion, cell senescence can also be induced by DNA damage without relying on the number of cell divisions. During normal aging, the number of senescent cells in the tissue increases significantly. Although senescent cells can no longer replicate, they retain metabolic activity and usually adopt immunogenic phenotypes, including pro-inflammatory secretory proteins, up-regulation of immune ligands, pro-survival responses, promiscuous gene expression (pGE) and staining positive Aging-related β-galactosidase activity. Aging-associated beta-galactosidase, together with p16Ink4A, is considered a biomarker of cellular senescence. This results in a false positive of mature tissue macrophages and senescence-associated beta-galactosidase as well as T-cell p16Ink4A. DNA damage response (DDR) prevents cell cycle progression until repair of damage such as double-strand break (DSB). Senescent cells display persistent DDR lesions and appear to be resistant to endogenous DNA repair activity. Such senescent cells in cultures and tissues from aged mammals retain true DSB associated with DDR markers. It has been suggested that the reserved DSB is the main driver of the aging process.

Aging – long considered to be solely the result of wear and tear – is in fact regulated by specific genetic pathways. Simple changes in the environment can drastically extend lifespan, suggesting that several of these genetic pathways control longevity in response to changes in the surroundings. Among them, hormonal signals are extremely important in the pathway of aging proteins, as shown in Figure 1. 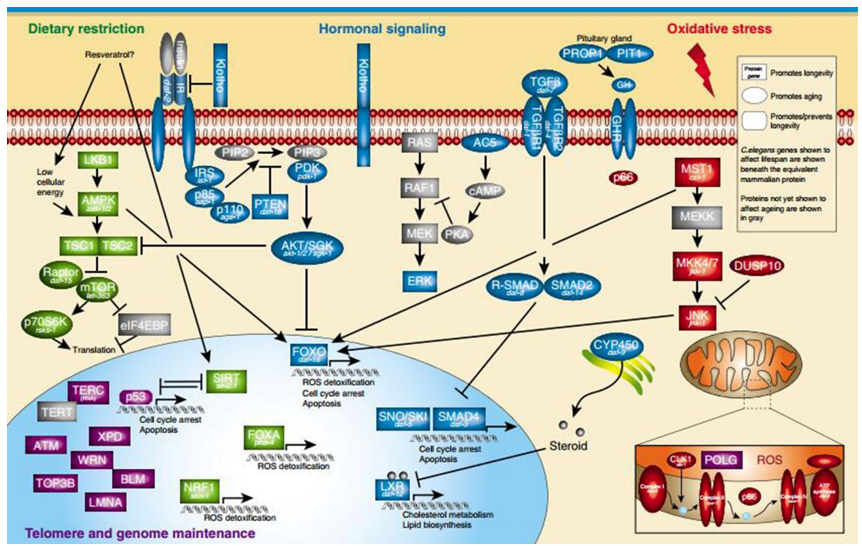 The first example of a specific pathway controlling longevity came from studies of Caenorhabditis elegans. Mutations that reduce the activity of the insulin receptor DAF-2 or the phosphoinositide 3-kinase (PI3K) AGE-1 extend lifespan in adult worms by more than 100%. The insulin receptor mediates its effects via the PI3K-AKT/SGK signaling pathway, which culminates in the negative regulation of the Forkhead transcription factor FOXO/DAF-16.Insulin signaling regulates aging in a conserved manner, from worms to mammals.

In mice, the Snell and Ames dwarf mutations, which are in the genes encoding the pituitary transcription factors PIT1 (POU1F1) and PROP1, respectively, extend lifespan by 42-67%. The extension in longevity in both mouse models is likely to be due to defects in the ability of the pituitary gland to secrete growth hormone (GH), because mice that have a null mutation in the GH receptor (GHR–/–) also display an ~21-40% increase in lifespan, whereas transgenic mice that overexpress GH live significantly shorter than wild-type mice . Interestingly, the Ames dwarf mice and the GHR–/– mice have reduced levels of circulating IGF1, fasting insulin and glucose, raising the possibility that the increased longevity of these mice is mediated by insulin/IGF1 signaling.

The secretory tissue of aging cells is very complex. This tissue is mainly involved in inflammation, proliferation and changes in extracellular matrix. The senescence-associated secretory phenotype (SASP) consisting of inflammatory cytokines, growth factors and proteases is another feature of senescent cells. There are many SASP effector mechanisms, autocrine or paracrine signals. Considering cytokines, SASP molecules IL-6 and IL-8 may force senescence without causing aging of adjacent healthy cells, while IL-1β can induce normal cell senescence in a paracrine manner. IL-1 also relies on the cleaving of caspase-1, so it stimulates the answer to pro-inflammatory. From the growth factor group, GM-CSF and VEGF act as SASP molecules. From a cellular perspective, the synergistic effect of the transcription factors NF-κB and C/EBPβ helps to increase the level of SAPS. SASP regulation is managed through transcriptional levels, an autocrine feedback loop, but most importantly managed through continuous DDR. The proteins p53, p21, p16ink4a and Bmi-1 are known as major players in senescence signaling, some of which can be used as markers. Other markers document morphological changes, chromatin recombination, apoptosis resistance, metabolic changes, cytoplasmic enlargement or abnormal nuclear morphology. Depending on the cellular environment, SASP has different effects, including inflammation or anti-inflammatory, tumor or anti-tumor effects. While considering the role of tumor promotion, they may have already supported cells that have been tumor-initiated rather than transforming healthy cells into transformation. Similarly, they play an anti-tumor protection by promoting the elimination of damaged cells by phagocytic cells. SASP is associated with many age-related diseases, including type 2 diabetes and atherosclerosis. This has prompted researchers to develop hemolysis drugs that kill and/or eliminate aging cells to improve the health of older people. Whether this method is effective or not is debatable. The nucleus of senescent cells is characterized by senescence-associated heterochromatin foci (SAHF) and chromatin-modified DNA fragments (DNA-SCARS) that enhance senescence. Senescent cells affect tumor suppression, wound healing and possible embryo/placental development, and play a pathological role in age-related diseases.