Nuclear receptors are a family of ligand-regulated transcription factors that are activated by steroid hormones, such as estrogen and progesterone, and numerous alternative lipid-soluble signals, as well as retinoic acid, oxysterols, and thyroid hormone. Unlike most intercellular messengers, the ligands will cross the plasma membrane and directly interact with nuclear receptors inside the cell (Figure. 1), instead of having to act via cell surface receptors. Once activated, nuclear receptors directly regulate transcription of genes that management a good sort of biological processes, including cell proliferation, development, metabolism, and reproduction. Although nuclear receptors primarily function as transcription factors, some have also been found to regulate cellular functions within the cytoplasm. For example, estrogens act through the estrogen receptor in the cytoplasm of endothelial cells to rapidly activate signaling pathways that control vascular tone and endothelial cell migration.

Nuclear receptors share a common structure, comprising a extremely variable amino-terminal domain that has many distinct transactivation regions (the A/B domain; also referred to as AF1 for activation function 1), a central conserved DNA-binding domain that includes two Zn fingers (the C domain), a short region responsible for nuclear localization (the D domain), and a large fairly well-conserved carboxy-terminal ligand-binding domain (the E domain, or LBD) that additionally contributes to interactions of the subset of nuclear receptors that form heterodimers. Some also possess a highly variable carboxy-terminal tail (the F domain) that in most cases has unknown functions. 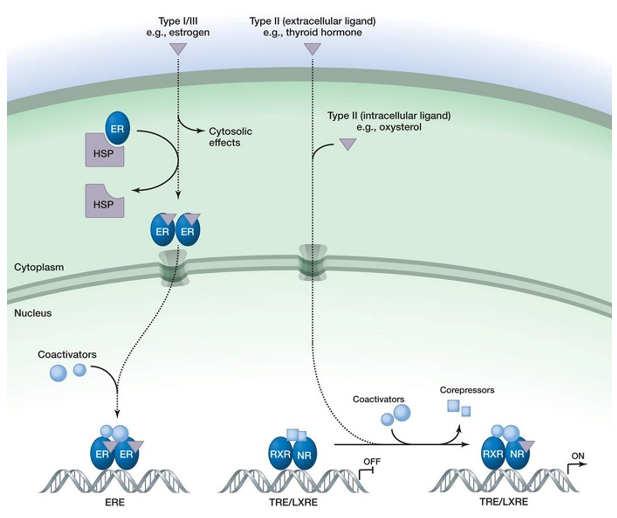 The receptors can exist as monomers, homodimers, or heterodimers and recognize DNA sequences termed hormone response elements (HREs) derived from pairs of sequences with the consensus RGGTCA (R is a purine). They can be grouped into four subtypes based on their mode of action. Type I receptors, such as the androgen receptor, the estrogen receptor, and the progesterone receptor, are anchored in the cytoplasm by chaperone proteins. Ligand binding frees the receptor from the chaperone, allowing homodimerization, exposure of the nuclear localization sequence, and entry into the nucleus (Figure. 1). Once in the nucleus, the ligand–receptor complex associates with transcriptional coactivators that facilitate binding to and activation of target genes. Recent genome-wide location analysis indicates that most nuclear-receptor binding sites in the genome are located in enhancer elements that are far away from the transcriptional start site, as first documented for the estrogen receptor. Studies of the glucocorticoid receptor suggest that the ligand-bound receptor rapidly exchanges with its binding sites and that increases and decreases in receptor activity follow changes in the concentration of endogenous glucocorticoids.

Type II receptors, such as the thyroid hormone receptor and the retinoic acid receptor, in contrast, reside in the nucleus bound to their specific DNA response elements even in the absence of ligand. They generally form heterodimers with the retinoid X receptor (RXR) and in the absence of ligand exert active repressive functions through interactions with NCoR and SMRT corepressor complexes that are associated with histone deacetylases (HDACs). Binding of ligand to the LBD leads to dissociation of corepressors and their replacement with coactivator complexes. Coactivator complexes typically contain proteins with enzymatic functions, including histone acetyltransferases, that help open up chromatin and facilitate activation of target genes. Note that several type II receptors bind to ligands produced in the same cell, which allows cell-autonomous feedback regulation.

Type III receptors function similarly to type I receptors except that the organization of the HRE differs (it is a direct repeat rather than inverted) and type IV receptors instead bind as monomers to half-site HREs.

Ligands allosterically control the interactions of nuclear receptors with coactivators and corepressors by influencing the conformation of a short helix, referred to as AF2 (activation function 2), at the carboxy-terminal end of the LBD. In the absence of ligand, the AF2 helix is in an open conformation that enables binding of corepressors to type II receptors. Upon agonist binding, the AF2 helix adopts a conformation in which it forms one side of a charge clamp that grips the ends of a short helix of consensus sequence LxxLL present in coactivator proteins that interact directly with the LBD. Selective modulation of nuclear receptor activities can be achieved by synthetic ligands that differentially alter the AF2 conformation. For example, the estrogen receptor modulator tamoxifen prevents AF2 from adopting a charge-clamp conformation, thereby blocking AF2-dependent transcriptional activity.

A characteristic feature of nuclear receptors with respect to their integrative roles in development and homeostasis is their ability to regulate different genes in different cell types. For example, estrogen receptors regulate different sets of genes in the brain, breast, and uterus that contribute to the distinct functions of those organs. Recent studies indicate that tissue-specific responses are a consequence of binding of nuclear receptors to enhancer elements that are selected in a cell-specific manner. Cell-specific enhancer selection is conferred by the key lineage-determining factors for each cell type, which interact in a collaborative manner to generate open regions of chromatin that provide access points for signal-dependent transcription factors (Figure. 2). In the case of LXRs, for example, macrophage-specific binding sites are established by interactions between macrophage-lineage-determining factors that include PU.1 and AP-1, whereas in liver LXR-binding sites occur in association with the hepatocyte-lineage-determining factors HNF4 and C/EBPα. In each case, a complex multistep process involving numerous coactivator proteins is involved in building a functional enhancer, and the tissue-specific responses can be further tailored by expression of distinct coactivator/corepressor complexes. 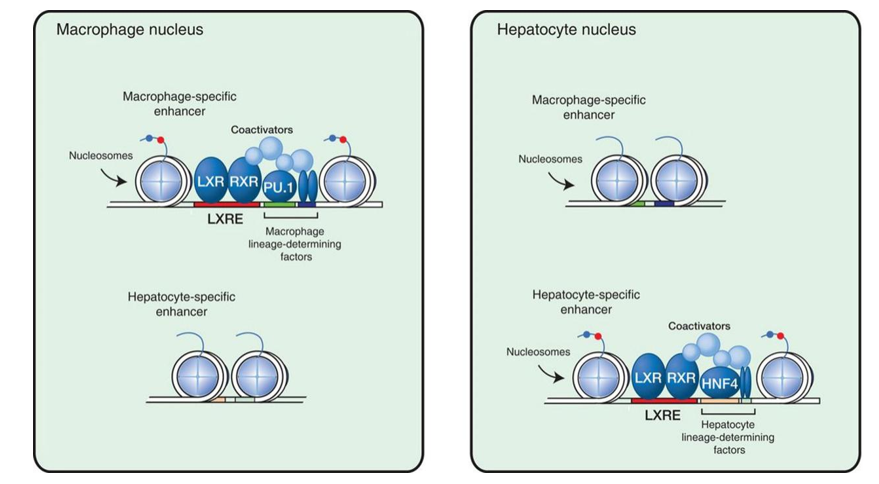