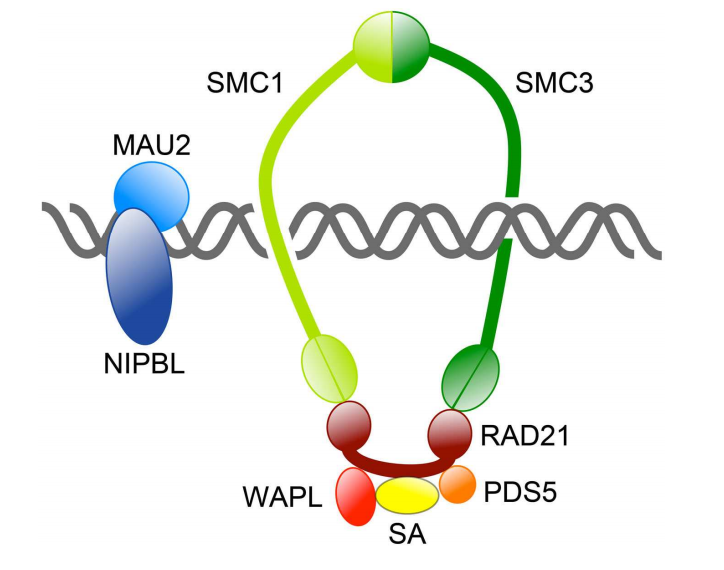 The protein complex responsible for the pairing of replicated chromosomes is called cohesin. Cohesin is a tripartite ring complex, which topologically entraps replicated DNA molecules keeping them together until the onset of anaphase. The core of this ring complex is composed out of three molecules: SMC 1, SMC 3 (structural maintenance of chromosomes), and the kleisin subunit Rad21/Scc1. Additional proteins directly associate with the cohesion complex (Scc3/SA, Pds5, WAPL, Sororin) and are thought to have critical roles in cohesin dynamics, and consequently mitotic fidelity.

The most popular, and soundly tested cohesin model postulates that cohesion keeps sister chromatids together by entrapping sister DNA fibers within the same cohesin ring. Cohesin rings are about 40 nm in diameter thus providing sufficient space for enclosing two 11 nm chromatin fibers. Other models have been proposed, such as the “handcuff” model, in which cohesion is mediated by two interlinked cohesion complexes, each entrapping its own DNA fiber. In either case, solid evidence supports that cohesin's interaction with DNA is of a topological nature, emphasizing that regulation of cohesin binding and function relies on the opening and closing the interphases between the core components.

Cohesin loading onto chromatin is dependent on a two-protein complex known as Scc2/4, also known as NIPBL/MAU-2. The Scc2/Scc4 loading complex is essential for sister chromatid cohesion during G1/S phase, but not during G2. This would entail that the Scc2/Scc4 has a primary function of loading cohesin onto the chromatin, but not in its stabilization or maintenance. Given the ring-like architecture of cohesin, its loading onto chromatin requires opening of the ring.

Sites of cohesin loading do not necessarily coincide with cohesin's accumulation sites. This is mostly due to the fact that once loaded, cohesin complexes can slide on the DNA molecule. Additionally, before DNA replication, the cohesion molecules display a highly dynamic association with DNA. Dissociation of cohesin from un-replicated DNA molecules is mediated by Wings-apart like protein (WAPL). Upon binding to the cohesin complex, WAPL removes cohesin from chromatin by disrupting the interface between SMC3 and Rad21/Scc1 subunits.

Cohesin establishment occurs during replication, at the time the newly replicated DNA molecule is being formed. Disruption of cohesin loading during G1 results in sister chromatid defects, while disruption during G2 does not. This means that the“effective” cohesion is established during S phase, during DNA replication. At the onset of replication, the dynamic properties of cohesin turnover change and a new pool of stable, “cohesive” cohesin can be identified by FRAP. Stabilization of cohesin complexes upon replication depends on the Eco1 acetyl transferase. This enzyme acetylates cohesin associated with replicated DNA at specific lysine residues on SMC3 and failure to acetylate leads to cohesion defects and cell death. SMC3 acetylation during the S phase has also been shown to confer cohesin protection by aiding the recruitment of Sororin, which favors cohesion establishment by protecting acetylated cohesion complexes from WAPL-mediated removal.

Once the cell enters mitosis, profound changes in the distribution of cohesin begin to take place. Cohesin at the chromosome arms is removed while centromeric cohesion is retained. The loss of arm cohesion, coupled with centromeric retention gives the characteristic “X” shape to the metaphase chromosomes. The removal of cohesin from the arms in early mitosis is a consequence of the “prophase pathway” which mainly relies on action of WAPL protein. WAPL imposes opening of the cohesin ring by disrupting the interface between SMC 3 and Rad21/Scc1 subunits. Consequently, WAPL mutations or knockdown leads to the loss of the characteristic X shape of chromosomes, with cohesin remaining all over chromosome arms.

The cleavage of cohesin at the metaphase-to-anaphase transition is conducted by a large cysteine protease called separase, which cleaves the kleisin subunit, distancing the heads of SMC 1 and SMC 3 subunits. This opens the cohesin ring, releasing sister DNA molecules from the proteinaceous cage. Once the forces that hold chromosomes together are released, there is no going back, therefore, centromeric cohesin cleavage must occur only after multiple safeguard mechanisms have been satisfied. Separase activity is thus tightly regulated and inhibited through multiple mechanisms until the onset of anaphase.

First, separase is inhibited by the binding of Securin, whose degradation is a prerequisite for sister chromatid separation. Securin inhibits separase by binding to its active site and abolishing its interaction with other substrates. The second layer of separase inhibition is mediated by the Cdk1-Cyclin B complex. Cyclin B-Cdk1 phosphorylates separase and this phosphorylation promotes Cdk1-CycB-separase binding, preventing separase activation until the onset of anaphase. Given the importance of this transition, the APC/C is tightly regulated during mitosis by a surveillance mechanism known as the spindle assembly checkpoint (SAC). The key effector of this mechanism is the mitotic checkpoint complex (MCC). This equilibrium changes once metaphase is achieved and chromosomes are bioriented. Stable chromosome attachments result in SAC satisfaction and the release of Cdc20 from the inhibitory MCC complex. Once this happens, APC/C binds Cdc20 becoming active to ubiquitinate Cyclin B and securin. Ubiquitination promotes the proteasome-mediated degradation of these targets and consequently the release of separase from its inhibition. 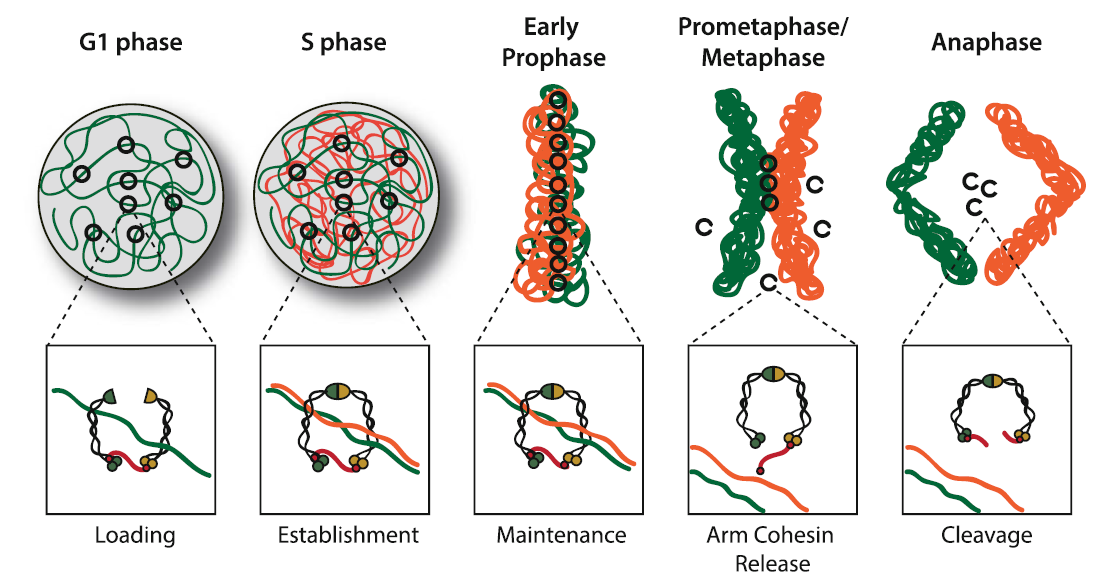 The chromatid cohesion has been linked to several human-health and reproduction conditions. Defects in cohesion and mechanisms regulating cohesin are common amongst cancer cells. Cancer cells display chromosomal instability (CIN) characterized by frequent gain or loss of chromosomes. CIN enhances the speed at which the cancer cells can evolve, by gaining or losing whole chromosomes, making them highly adaptable to any possible treatment.

Age-related female infertility has also been proposed to relate with cohesion decay in aged oocytes, giving rise to genetic abnormalities such as Down's syndrome. “Cohesion fatigue”, evidenced by decreased levels of cohesion is followed by segregation defects and decreased fertility in oocytes. Other rare developmental disorders have also been linked to the cohesion process and are now known as “Cohesinopathies”. Most of these diseases are linked to the non-mitotic roles of the cohesion apparatus (e.g. regulation of transcription and genome architecture).