Hedgehog proteins important in developmental signals have been combined with other newly discovered proteins from whole eukaryotes containing structural proteins of the real domain. Hedgehog (Hh) pathway is one of the basic signal transduction pathways in animal development, and is also involved in stem cell maintenance and carcinogenesis. The hedgehog (hh) gene was first discovered in fruit flies, and members of the family have since been found in most posterior species. Hh protein consists of two domains, one is the amino-terminal domain HhN with biosignal activity, and the other is the carboxy-terminal autocatalytic domain that cleaves Hh into two parts and adds a cholesterol moiety to HhN HhC. HhC shares sequence similarity with self-splicing proteins, and the shared region is called Hint. Recently, a new class of proteins containing Hint domains has been discovered in bacteria and eukaryotes. Among them, the Hog class, which constitutes a family of Hh proteins, is common throughout eukaryotes. Non-Hh Hog proteins have a carboxy-terminal domain (Hog domain) that is highly similar to HhC, although they lack the HhN domain and have other amino-terminal domains. The modified HhN is released from the cell and passes through the extracellular space. When combined with its Patched receptor, it relieves Patched's inhibitory effect on smooth proteins, a G-protein coupled receptor. The resulting signal cascade converges on the transcription factor Cubitus interruptus (Ci) or its mammalian counterpart Gli protein, which activates or inhibits the target gene.

Hedgehog (Hh) protein consists of two distinct domains, the amino-terminal "Hedge" domain (HhN) and the carboxy-terminal "Hog" domain (HhC) (Figure 1). The founding members of the hh gene family were first discovered in genetic screening of Drosophila melanogaster, and once the gene was cloned, vertebrates were soon discovered. 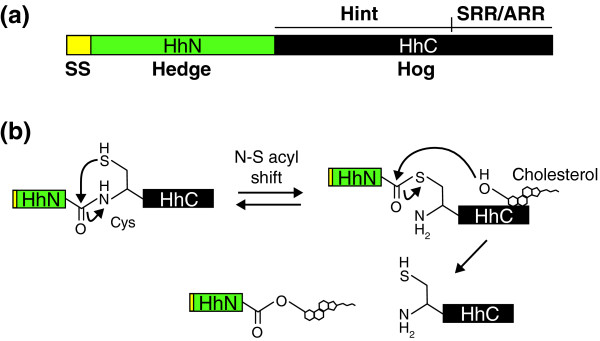 Shortly after the discovery of Drosophila and vertebrate Hh proteins, it was noted that their carboxy-terminal autoproteolytic domains are similar in sequence to self-splicing intein proteins. Inteins are protein sequences that can autocatalytically splice themselves from longer protein precursors (similar to introns) and link flanking regions into functional proteins. The determination of the X-ray structure of the Drosophila HhC domain confirms this similarity, and the similar region is called the cue module. Recently, novel cue-containing proteins with various processing activities have been discovered in bacteria and eukaryotes (Figure 2).

Hh protein is synthesized as a precursor protein (about 400-460 amino acids in length) and contains several different motifs and domains: a signal peptide used for protein export, and the secreted amino-terminal HhN (Hedge) as a signal molecule The domain and the autocatalytic carboxy-terminal HhC (Hog) domain containing the Hint module. Multiple sequence alignments of HhN and HhC domains have been proposed that define conserved residues and characteristics. HhC binds cholesterol in the sterol recognition region (SRR). The catalytic activity of the Hint module divides Hh into two parts and adds a cholesterol moiety to the carboxy terminus of HhN. The structure of Drosophila HhC has been determined using X-ray crystallography and has been shown to be highly consistent with the contained proteins. The structure is spherical and consists of beta chains, starting with cysteine ​​residues that are essential for automatic processing. The nematode Hh-related protein WRT-1 has been shown to be processed automatically like Hh. Considering that the key residues of the HhC active site are very conserved among Hog proteins, it can be assumed that most, if not all, are processed automatically. However, it is not known what adducts bind to the adduct recognition region (ARR) of Hh-related proteins. Interestingly, the ARR region of some protoplast Hog proteins contains motifs that are conserved with Hh SRR, suggesting that sterol binding may be an ancient feature.

Sonic hedgehog is a protein secreted by humans and is encoded by the SHH gene. It is the best research ligand for hedgehog signaling pathways. Others are Desert Hedgehog (DHH) and Indian Hedgehog (IHH). It plays a key role in animal development from insects to mammals. In vertebrates, it is involved in organogenesis, including finger growth on the limbs and brain tissue. The sonic hedgehog is a prototype example of morphinogen, defined by the model of the French flag of Lewis Wolpert. This molecule diffuses to form a concentration gradient and has different effects on its developing embryonic cells based on concentration. Sonic hedgehogs are also active in adults. For example, it controls the proliferation of adult stem cells and is involved in the development of certain cancers. 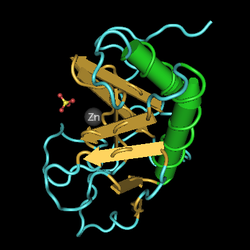 Hedgehog pathway activation is associated with cancer development in a variety of organs, including the brain, lungs, breasts, prostate and skin. Basal cell carcinoma is the most common form of malignant tumors and is most closely related to Hedgehog signaling. In patients with this disease, repaired loss of function mutations and smoothed activation mutations have been identified. Abnormal activation of this pathway may lead to the development of disease by transforming adult stem cells into cancer stem cells that cause tumors. Cancer researchers hope that specific inhibitors of hedgehog signaling will provide effective treatments for a variety of malignancies.