Cancer development depends on the direct and indirect consequences of oncogenic mutations, namely the reprogramming of cellular metabolism. A common feature of cancer cell metabolism is the ability to obtain necessary nutrients from an environment that is often deficient in nutrients, and to use these nutrients to maintain vitality and build new biomass. Changes in intracellular and extracellular metabolites that can accompany cancer-related metabolic reprogramming have profound effects on gene expression, cell differentiation, and tumor microenvironment. In this review, we organize cancer-related metabolic changes into six characteristics: (1) uncontrolled uptake of glucose and amino acids; (2) the use of opportunistic nutritional access; (3) the use of glycolysis/TCA cycle intermediates In vivo biosynthesis and NADPH production, (4) increased demand for nitrogen, (5) altered gene regulation driven by metabolites, and (6) metabolic interactions with the microenvironment. Although few tumors show all six features, most can show several features. The specific signs exhibited by a single tumor may ultimately help better tumor classification and help guide treatment.

While the first observations on metabolic alterations that are characteristic for tumors were first made nearly a century ago, the field of cancer metabolism has become a topic of a renewed interest in the past decade. Aided by new biochemical and molecular biological tools, studies in cancer cell metabolism have expanded our understanding of the mechanisms and functional consequences of tumor-associated metabolic alterations at various stages of tumorigenesis. In particular, it has become evident that tumorigenesis-associated metabolic alterations encompass all stages of cell-metabolite interaction, (a) affecting the metabolite influx through conferring an increased ability to acquire the necessary nutrients; (b) shaping the way the nutrients are preferentially assigned to metabolic pathways that contribute to cellular tumorigenic properties, as well as (c) exerting long-ranging effects on cellular fate, among which are alterations in differentiation of cancer cells themselves as well as of the components of the tumor microenvironment (Figure 1). In this Perspective, we take a detailed look at distinct hallmarks of tumorigenesis-associated metabolic reprogramming, and examine the functional contribution of these hallmarks to the establishment and maintenance of the tumorigenic state. 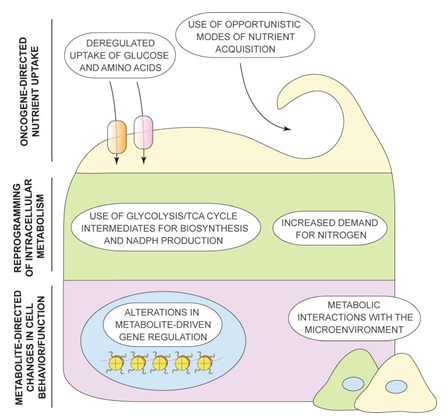 Remarkably, mTORC1 inhibitors greatly increase the cellular ability to recover amino acids from captured extracellular protein and enhance their growth in the absence of essential amino acids. Thus, the utilization of extracellular protein as nutrients is repressed by mTORC1 under amino acid-replete conditions and is only utilized as an emergency source in conditions when free amino acids are insufficient. A spatial difference in the effect of rapamycin treatment in a KRASG12D-driven mouse model of pancreatic cancer provides a striking illustration of this paradigm. While rapamycin suppresses cancer cell proliferation at the tumor margin where the vascular delivery of nutrients is effective, rapamycin enhances cell proliferation within the poorly-vascularized tumor core by promoting enhanced lysosomal degradation of extracellular proteins. 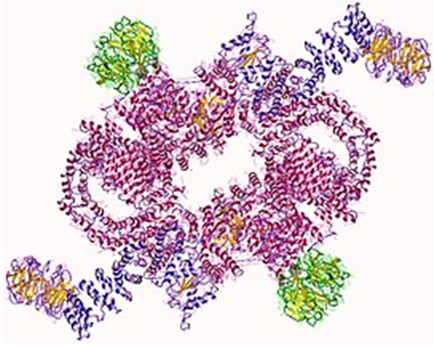 To meet the biosynthetic requirements associated with proliferation, cells must increase their uptake of nutrients from the environment. The two main nutrients that support mammalian cell survival and biosynthesis are glucose and glutamine. Through the catabolism of glucose and glutamine, cells can maintain a library of multiple carbon intermediates that are used as the basis for assembling various macromolecules. In addition, the controlled oxidation of the carbon backbone of glucose and glutamine allows the cell to capture its reducing ability in the form of NADH and FADH 2, which mediates the transfer of electrons to the electron transport chain to promote the production of ATP, or the related cofactor NADPH It exists in a form that provides reduced energy for a variety of biosynthetic reactions and helps maintain the cell's redox capacity. 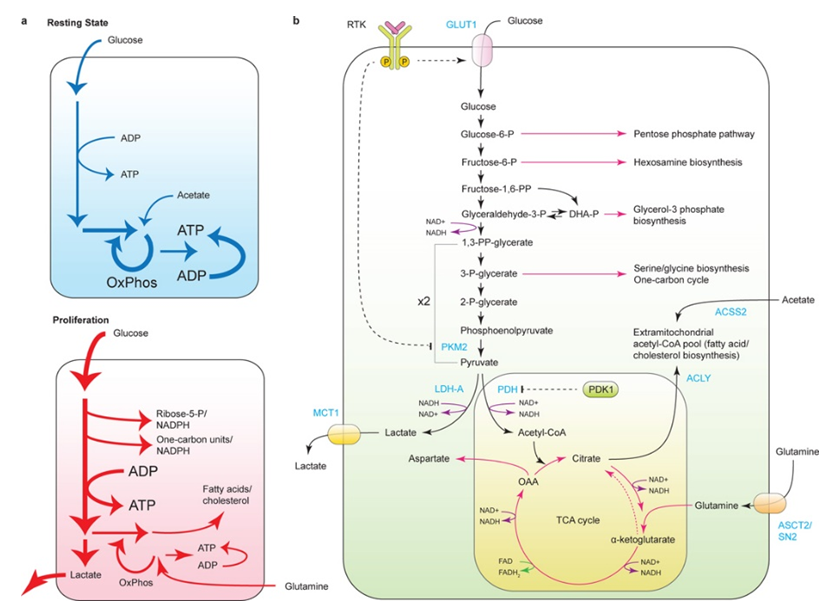 In addition to increasing the consumption of carbon in biosynthetic pathways, growth signaling concomitantly elevates the cellular demand for reduced nitrogen. Indeed, a proliferating cell must synthesize a number of nitrogen-containing molecules de novo, including nucleotides, non-essential amino acids and polyamines. As discussed above, the transcriptional effects of c-myc and E2F result in enhanced cellular uptake of glutamine. A non-essential amino acid containing two atoms of reduced nitrogen, glutamine serves as the principal way in which reduced nitrogen is transported between cells in metazoan organisms. The amide group of glutamines is an indispensable donor of nitrogen for the biosynthesis of purine and pyrimidine bases (Figure 5). Thus, one glutamine molecule is used in the production of uracil and thymine, cytosine and adenine each require two, and building a guanine base costs a cell three molecules of glutamine. In addition, the assembly of both pyrimidine and purine rings utilizes aspartate, which is derived from the transamination of the TCA cycle metabolite oxaloacetate and glutamic acid, both of which are catabolites of glutamine. Thus, glutamine is a key structural building block in the biosynthesis of nucleotides. Accordingly, glutamine levels have been shown to be rate-limiting for cell cycle progression, and glutamine deprivation leads to cell cycle arrest in the S-phase in certain cellular contexts. 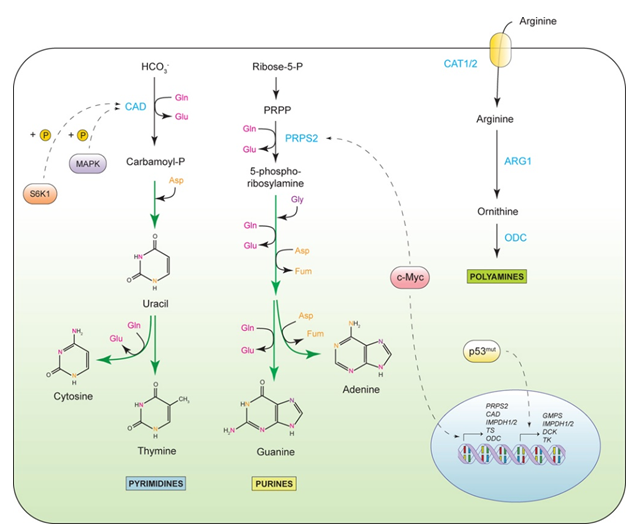 In cancer, the classic metabolic reprogramming pathway is the Warburg effect or aerobic glycolysis. Glycolysis is the physiological response to hypoxia in normal tissues, while Otto Warburg observed tumor sections and ascites cancer cells constitutively absorb glucose and produce lactic acid in the 1920s. This phenomenon has been observed in many types of cancer cells. Increased glycolytic flux allows glycolytic intermediates to provide subsidiary pathways to meet the metabolic needs of proliferating cells. 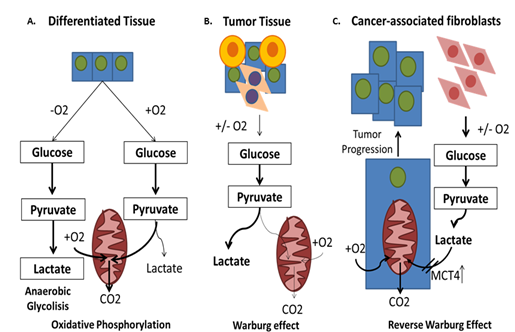