Ang is a family of secreted growth factors. This family is mainly composed of Ang-1, Ang-2, Ang-3 and Ang-4. The Ang-1 gene is located at 8p22 and has a molecular weight of about 70 kD. It is composed of 498 amino acids and contains 3 domains. 100 amino acids from the N-terminus are the first domain and have no homology; the 100th to 280 amino acids are The second domain is spirally coiled and has the typical characteristics of a secreted signal peptide; the 280-496 amino acids are the third domain, and its spatial division is very similar to that of the collagen family, which is called collagen-like fragment L3j. Angiopoietin is part of a series of angiogenic factors that play a role in embryonic and postnatal angiogenesis. There are four identified angiogenins: ANGPT1, ANGPT2, ANGPTL3, ANGPT4. In addition, there are many proteins that are closely related to ("similar") angiopoietin (angiopoietin-related proteins 1, ANGPTL2, ANGPTL3, ANGPTL4, ANGPTL5, ANGPTL6, ANGPTL7, ANGPTL8). Angiopoietin-1 is essential for vascular maturation, adhesion, migration and survival. On the other hand, Angiopoietin-2 promotes cell death and destroys blood vessel formation. However, when used in combination with vascular endothelial growth factor (VEGF), it can promote new blood vessel formation. 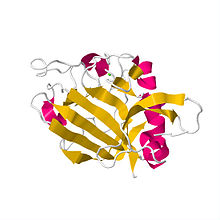 Tie2 is a tyrosine kinase receptor, and its ligands are A ng-1 and A ng-2. It has homology with immunoglobulin and epidermal growth factor (EGF) receptor, and mainly expresses in vascular endothelial cells. The Tie2 gene is located at 1p33～1p34, and the total length of mRNA is 4.4 kb. The protein precursor consists of 1124 amino acid residues. Ang-1 and Tie2 combine to form a dimer, which activates the latter by phosphorylation. The binding of Ang-2 to Tie2 can inhibit the latter's activity.

The Ang-1 gene is located at positions 8q22.3 to q23, and consists of 498 amino acids. The N-terminus has a hydrophobic secretion signal peptide and an alpha helix domain, and the C-terminus contains a fibrinogen-like domain. Ang-1 cannot directly promote the growth of endothelial cells in vitro, which may be different from the initiation of new blood vessels, but it plays a role in the formation of new blood vessel lumen and stabilizes the vascular structure. Ang-1 activates Tie2 after binding to the receptor. Tie2 activated endothelial cells can attract vascular smooth muscle cells, pericytes, etc., and support endothelial cells to form a complete blood vessel wall, thereby promoting angiogenesis. Interaction with the matrix and the like to maintain the stability of the vascular structure. Therefore, Ang-1 is mainly related to maintaining the interaction between endothelial cells and surrounding support cells, and plays an important role in maintaining the stability of vascular structure.

The Ang-2 gene is located at 8p23.1 and is mainly distributed in the ovary, uterus and placenta in normal adults, which may be related to the revascularization in these three tissues. Ang-2 is composed of 496 amino acids, has 60% homology with Ang-1, and can also bind to the receptor Tie2. Most scholars believe that Ang-2 is a Tie2 ligand with no signal transduction function. It does not cause the Tie2 receptor phosphorylation and can competitively block the effect of Ang-1.Other studies suggest that Ang-2 does not regulate endothelial cell proliferation during the regulation of angiogenesis, but binds to endothelial-specific Tie2, promotes or inhibits the phosphorylation of Tie2, and regulates vascular maturation through downstream pathways of the receptor. Therefore, the Ang-2/Tie2 signaling pathway plays a complex role in angiogenesis, and the specific mechanism needs further study.

The Ang-1 and Ang-2 / Tie2 signal transduction pathways play important roles in human physiological and pathological angiogenesis. This pathway is a new signal transduction pathway in addition to V EGF. Research on them helps to clarify the mechanism of angiogenesis and lays the foundation for the use of these targets for the treatment of related diseases. Ang-1 has the effect of promoting angiogenesis and stabilizing vascular structure. This characteristic of Ang-1 can be used with V EG F to treat vascular degenerative diseases; Ang-1 can increase the tightness of the connection between endothelial cells and can be used This feature reduces leakage of blood vessels and reduces inflammation. Ang-2 has dual effects on angiogenesis, and how to use A ng-2 to promote angiogenesis to treat vascular dysplasia is a topic worthy of research.