Cytokinesis is the physical process of cell division during which the cytoplasm of a single eukaryotic cell divides into two daughter cells. Cytokinesis begins in anaphase and ends in telophase, reaching completion as the next interphase begins in mitosis and meiosis. Cytokinesis performs an essential process to separate the cell in half and ensure that one nucleus ends up in each daughter cell. Cytokinesis is carried out by the constriction of the contractile ring made up of actin, myosin-II, and other conserved proteins. The contractile ring shrinks at the equator of the cell, pinching the plasma membrane inward, and forming what is called a cleavage furrow. Eventually, the contractile ring shrinks to the point that there are two separate cells each bound by its own plasma membrane.

Cytokinesis is a multi-step process that proceeds linearly with time according to the following general framework. It begins with a signal from the mitotic apparatus that must be transmitted to the cellular cortex at the cleavage site. Receipt of the signal at the cortex sets off a complex set of reactions that transduce the signal into changes in the actin cytoskeleton and lead to formation of an actomyosin-based contractile ring. Mechanical processes in the ring and its interaction with the cortex result in cytokinesis.

Figure 1. Cytokinesis in animal cells. (Quoted from the BioNinja website)

The location of the contractile ring and the plane of cell division is determined by the mitotic spindle in animal cells. The contractile ring invariably forms in the plane of the metaphase plate, at right angles to the long axis of the mitotic spindle, thereby ensuring that division occurs between the two sets of separated chromosomes. The spindle portion of the designated segmentation plane varies depending on the cell type: in some cells it is the astral microtubules; in other cases it is an anti-parallel microtubule that overlaps in the central spindle. Ingenious experiments in large embryonic cells have shown that even when the two centrosomes are not connected to each other by the mitotic spindle, a cleavage furrow is formed midway between the asters from the two centrosomes. Thus, in these cells, microtubule asters—not a chromosome or other part of the spindle—sends a signal to the cell cortex to specify where the contractile ring should be assembled.

Most cells divide symmetrically. In most animal cells, the contractile ring is formed around the equator of the parent cell, so that the two daughter cells produced are of equal size and have similar properties. This symmetry comes from the placement of the mitotic spindle, which in most cases tends to center itself in the cytoplasm. However, there are many instances in development when cells divide asymmetrically to produce two cells that differ in size, in the cytoplasmic contents they inherit, or in both. To position the plane of division asymmetrically, the spindle has to be moved in a controlled manner within the dividing cell. It seems likely that such spindle movements are directed by changes in local regions of the cell cortex and that motor proteins localized there pull one of the spindle poles, via its astral microtubules, to the appropriate region. 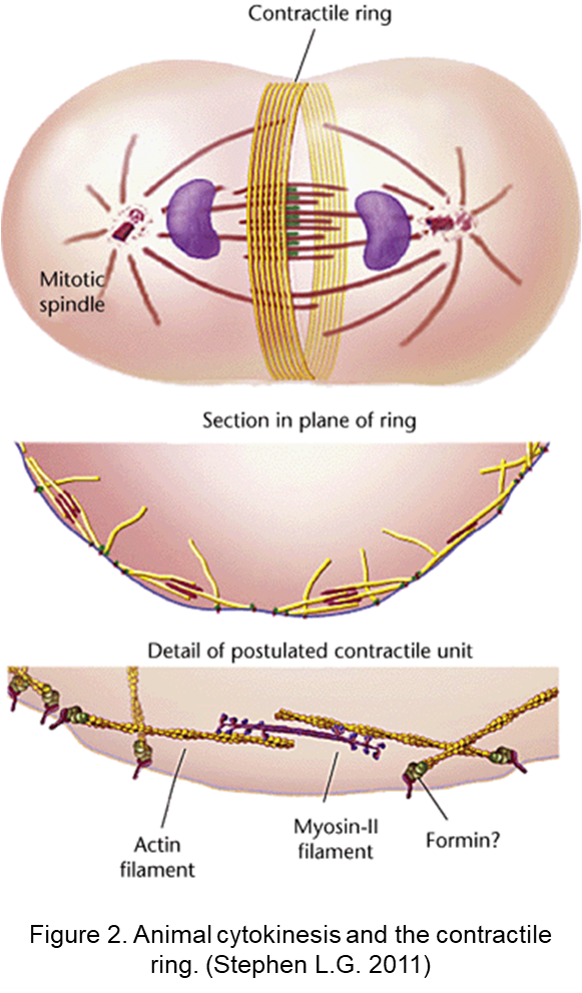 The importance of actin to cytokinesis has long been recognized, and is based on several observations. (1) In almost all cell types, actin is concentrated in a ring at the site of division. (2) Treatment with anti-actin drugs such as cytochalasin blocks cytokinesis. (3) Actin mutants of budding yeast form large multinucleate cells with cytokinesis and polarity defects. (4) Mutations in genes encoding a number of actin-associated proteins in several organisms disrupt cytokinesis.

Cytoplasmic myosin II, the cytoplasmic (non-muscle) form of the classical long-tailed myosin, has long been assumed to be the molecular motor of cytokinesis. The tight regulation of the motile activity and multimer assembly of myosin resulting from the phosphorylation of key amino acids makes myosin activity an obvious candidate for a major control point during cytokinesis. A molecule of cytoplasmic myosin II is a hexamer composed of two each of three pairs of polypeptides: the 200 kDa heavy chain (MHC), the 18 kDa essential light chain (ELC) and the 20 kDa regulatory light chain (RLC). The Nterminal half of the heavy chain forms the globular motor (or 'head') domain which contains the actin-binding site and actin-activated ATPase. The C-terminal portions of the two heavy chains form an α-helical coiled-coil rod which can oligomerize with other myosin molecules to form short bipolar filaments similar to the myosin filaments of muscle tissue. Between the head and rod domains is the 'neck' region, where the ELC and RLC bind. The state of phosphorylation of the RLC has a major influence on the motor activity of the myosin molecule.

The genomes of probably all eukaryotic organisms contain multiple genes encoding various members of a family of related proteins called septins, which play a general role in cell surface phenomena (including cytokinesis) involving interactions between the plasma membrane and the cortical cytoskeleton. Septin proteins contain, in addition to some family-specific motifs, P-loop consensus sequences indicative of nucleotide-binding functions, and most contain a C-terminal coiled-coil domain. The original members of the septin family of proteins were identified in S. cerevisiae as the product of the cell division cycle genes CDC3, CDC10, CDC11, and CDC12, mutants of which yield identical phenotypes with large, multinucleated, multiply budded cells indicating defects in cytokinesis, as well as phenotypes indicating defects in other processes such as bud site selection and bud morphogenesis.

A number of other cytoskeletal proteins localize in the vicinity of the cleavage furrow, but their importance to cytokinesis is unknown. These fall into several categories based on their biochemical functions: actin filament cross-linking or bundling proteins such as a-actinin, filamin, and the newly-discovered anillin; actin-membrane linkers such as talin and ERM proteins; those that regulate F-actin assembly or organization in other ways, such as acidic calponin, which inhibits the ATPase activity of phosphorylated myosin; and transmembrane glycoproteins such as CD43. It is important to emphasize that for most of these proteins, there is no ultrastructural evidence that they are actual components of the contractile ring. In fact, it is probable that at least some are located in microvilli within the cleavage furrow rather than in the ring itself. In addition, in the few cases tested, mutations in these genes have not led to cytokinesis defects. This does not exclude the possibility of important roles in cytokinesis, as the function of these proteins may be redundant.

Figure 3. Cytokinesis in plant cells. (Quoted from the BioNinja website)

Plant cells determine the cleavage site by use of a “landmark”, the placement of which occurs during interphase. In general, microtubules radiate from the nucleus towards the membrane and span the cell cortex in an ordered manner during interphase in plants. Late in interphase, the nucleus is centrally positioned through microtubule forces. Then microtubules emanating from the nucleus are accumulated in a transverse plane with the shortest nucleus-cortex distance. This cytoplasmic structure is called the phragmosome. Once the nucleus is positioned, microtubules and actin accumulate in a band on the plasma membrane where the phragmosome network and membrane meet, forming a medial ring called the preprophase band (PPB). The PPB subsequently narrows in early mitosis, marking the future division plane. The PPB disassembles before metaphase; however, the division site remains marked on the cell cortex by an unknown mechanism. This mark eventually guides the fusion of the cell plate with the plasma membrane.

In plants, the onset of cell division in somatic cells is catalyzed by the creation of the phragmoplast. The phragmoplast forms in the cell middle and is thought to develop from the remains of the mitotic spindle in anaphase. It is composed of interdigitating plus ends of microtubules, actin, and vesicles. The vesicles are transported to the middle of the cell along microtubules, as they do not accumulate in the cell middle in cells lacking microtubules. A recent study, utilizing high-resolution electron tomography, indicates that kinesins are involved in the transport of vesicles to the division site. The cell plate forms through fusion of phragmoplast-associated vesicles.