The extracellular matrix (ECM) is defined as the space outside the cell compartment and is a complex micro-ecological environment consisting of proteins and soluble factors that provide a scaffold for the cells. Biophysical and biochemical cues are essential for cell development, intercellular communication and growth. The biophysical interaction between cells and ECM is primarily guided by integrins. Transmembrane heterodimeric molecules, composed of alpha and beta subunits, are specific for a variety of matrix ligands such as fibronectin, laminin and collagen. This interaction affects the dynamic balance of tension, cell polarity and migration in the environment. In addition, downstream intracellular signaling mediated by integrin-ECM interaction plays an important role in tissue development, differentiation, gene regulation and protein synthesis, and ultimately cell survival.

The components of ECM are produced by the resident cells in the cells and secreted into the ECM by exocytosis, and once secreted, they accumulate with the existing matrix. ECM consists of an interlocking network of fibrin and glycosaminoglycan (GAG). 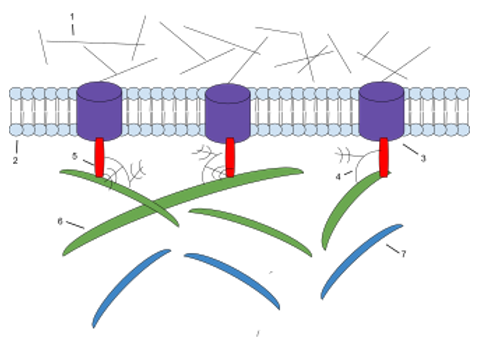 Heparan sulfate (HS) is a linear polysaccharide found in all animal tissues. It occurs in the form of proteoglycans (PG) in which two or three HS chains are attached to the cell surface or to the ECM protein. HS binds to a variety of protein ligands in this form and modulates a variety of biological activities, including developmental processes, angiogenesis, blood clotting, and tumor metastasis. In the extracellular matrix, especially the basement membrane, the multidomain proteins perlecan, lectin and collagen XVIII are the major proteins attached to heparan sulfate.

Chondroitin sulfate contributes to the tensile strength of the cartilage, tendon, ligament and aortic wall. They are also known to affect neural plasticity.

The keratan sulfate has a variable sulfate content and, unlike many other GAGs, it does not contain uronic acid. They are found in the cornea, cartilage, bones and horns of animals.

Hyaluronic acid is a polysaccharide composed of alternating residues of D-glucuronic acid and N-acetylglucosamine. Unlike other GAGs, it is not found to be a proteoglycan. Hyaluronic acid in the extracellular space provides a counteracting expansion force by absorbing a large amount of water, giving the tissue the ability to resist compression. Therefore, hyaluronic acid is abundantly present in the ECM of the weight bearing joint. It is also a major component of the interstitial gel. Hyaluronic acid is present on the inner surface of the cell membrane and is transported out of the cell during biosynthesis. Hyaluronic acid an environmental cue that regulate cell behavior during embryonic development, healing processes, inflammation, and tumor formation. It interacts with a specific transmembrane receptor CD44.

Collagens are the most abundant protein in the ECM. In fact, collagen is the most abundant protein in the human body and accounts for 90% of bone matrix protein content. Collagens are present in the ECM as fibrillar proteins and give structural support to resident cells. Collagen is exocytosed in precursor form (procollagen), which is then cleaved by procollagen proteases to allow extracellular assembly. Disorders such as Ehlers Danlos Syndrome, osteogenesis imperfecta, and epidermolysis bullosa are linked with genetic defects in collagen-encoding genes. The collagen can be divided into several families according to the types of structure they form:

Elastins, in contrast to collagens, give elasticity to tissues, allowing them to stretch when needed and then return to their original state. This is useful in blood vessels, the lungs, in skin, and the ligamentum nuchae, and these tissues contain high amounts of elastins. Elastins are synthesized by fibroblasts and smooth muscle cells. Elastins are highly insoluble, and tropoelastins are secreted inside a chaperone molecule, which releases the precursor molecule upon contact with a fiber of mature elastin. Tropoelastins are then deaminated to become incorporated into the elastin strand. Disorders such as cutis laxa and Williams syndrome are associated with deficient or absent elastin fibers in the ECM.

In 2016, it has been reported the presence of DNA, RNA, and Matrix-bound nanovesicles (MBVs) within ECM bioscaffolds. MBVs shape and size were found to be consistent with previously described exosomes. MBVs cargo includes different protein molecules, lipids, DNA, fragments, and miRNAs. Similar to ECM bioscaffolds, MBVs can modify the activation state of macrophages and alter different cellular properties such as; proliferation, migration and cell cycle. MBVs are now believed to be an integral and functional key component of ECM bioscaffolds.

Collagen is the most abundant protein in ECM. In fact, collagen is the most abundant protein in the human body, accounting for 90% of the bone matrix protein content. Collagen is present in the ECM as fibrin and provides structural support for resident cells. Collagen precursor (proto-collagen) exocytosis is then cleaved by procollagen protease to allow extracellular assembly. Diseases such as Ehlers Danlos syndrome, osteogenesis imperfecta and bullous epidermolysis are associated with genetic defects in collagen-encoding genes. According to the type of structure formed by collagen, it can be divided into several families:

In contrast to collagen, elastin imparts elasticity to the tissue, allowing them to stretch as needed and then return to their original state. This is useful for blood vessels, lungs, skin and ligament ligaments, which contain large amounts of elastin. Elastin is synthesized by fibroblasts and smooth muscle cells. Elastin is highly insoluble, and tropoelastin is secreted inside the molecular chaperone molecule, which releases the precursor molecule upon contact with the fibers of the mature elastin. The elastin is then deaminated to incorporate the elastin chain. Diseases such as sagging skin and Williams syndrome are associated with insufficient or lack of elastin fibers in the ECM.

In 2016, it was reported that DNA, RNA and binding matrix nanovesicles (MBV) were present in the ECM bioscaffold. The shape and size of the MBV was found to be consistent with the exosomes previously described. MBV's goods include different protein molecules, lipids, DNA, fragments and miRNAs. Similar to ECM bioscaffolds, MBV can modify the activation state of macrophages and alter different cellular properties such as proliferation, migration and cell cycle. MBV is now considered an indispensable key functional component of the ECM bioscaffold.