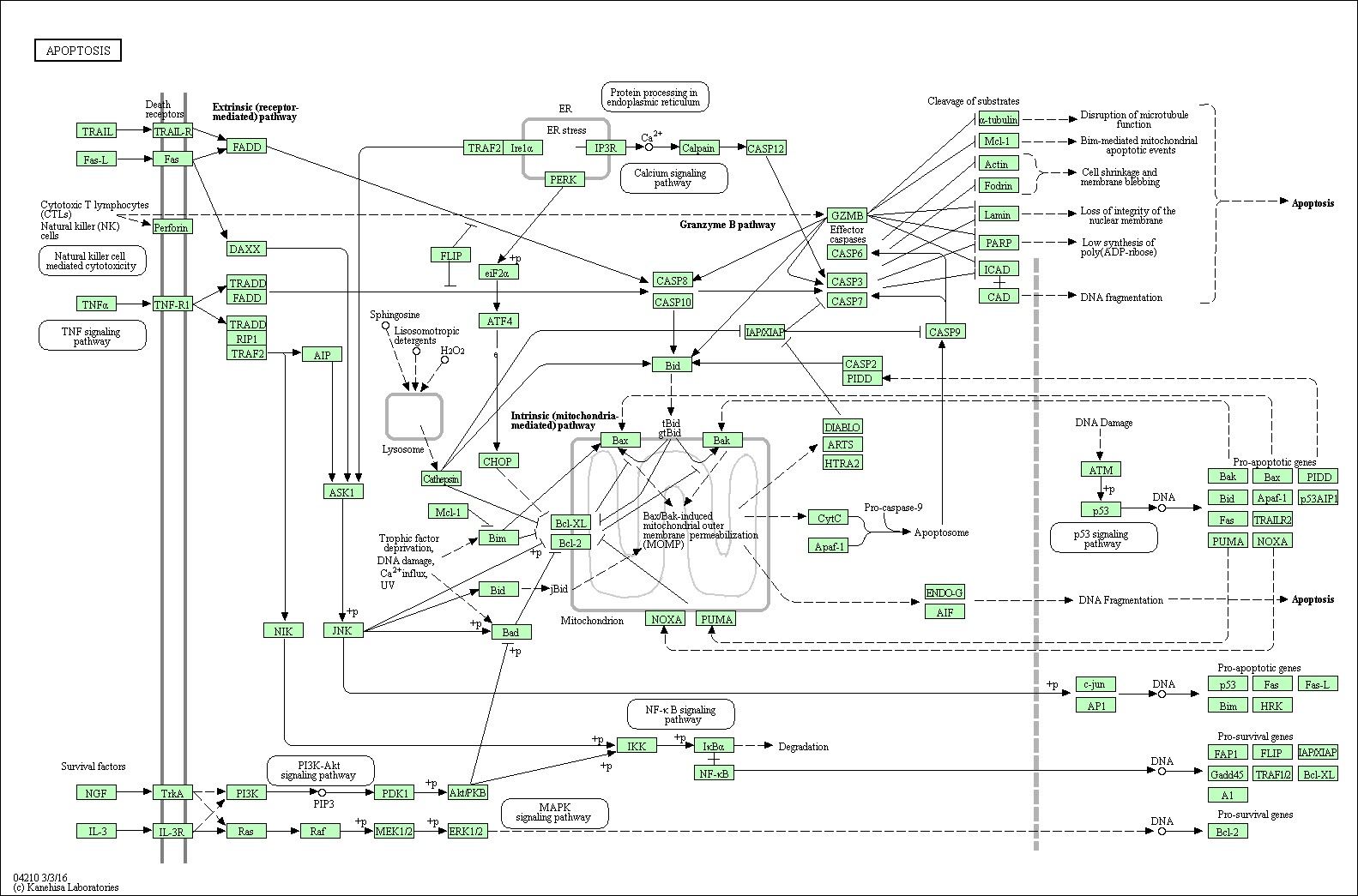 Apoptosis is a kind of programmed cell death (PCD) plays a fundamental role in multicellular organism development and tissue homeostasis. We might take it as a regulated cellular suicide mechanism. Abnormal regulation of this process is associated with a wide variety of human diseases, including immunological and developmental disorders, neurodegeneration, and cancer. In contrast to necrosis, which is a form of traumatic cell death that results from acute cellular injury, apoptosis is a highly regulated and controlled process that confers advantages during an organism's lifecycle. Unlike necrosis, apoptosis produces cell fragments called apoptotic bodies that phagocytic cells are able to engulf and quickly remove before the contents of the cell can spill out onto surrounding cells and cause damage.

The initiation of apoptosis is tightly regulated by activation mechanisms, and once apoptosis has begun, it inevitably leads to the death of the cell. There are at least three different kinds of pathways participate in apoptosis initiation: death receptor signaling pathway, mitochondrial pathway and endoplasmic reticulum(ER) stress pathway. As a pathway is more or less sequential in nature, removing or modifying one component leads to an effect in another. Inhibition of apoptosis can result in a number of cancers, autoimmune diseases, inflammatory diseases, and viral infections. On the other hand, excess apoptosis can lead to neurodegenerative diseases, hematologic diseases, and tissue damage with a cell biology phenomenon that is loss of control of the cell death.

Two typical theories of the direct initiation of apoptotic mechanisms have been raised: the TNF-induced (tumour necrosis factor) model and the Fas-Fasligand mediated model. TNF-alpha is a cytokine produced mainly by activated macrophages, and is the major extrinsic mediator of apoptosis. The binding of TNF-alpha to TNFR1 was able to initiate the pathway leads to caspase activation via the intermediate membrane proteins TNF receptor-associated death domain (TRADD) or Fas-associated death domain protein (FADD). The First apoptosis signal (Fas, also known as Apo-1 or CD95) receptor binds the Fas ligand (FasL), a transmembrane protein part of the TNF family. The interaction between Fas and FasL results in the formation of the death-inducing signaling complex (DISC), which contains the FADD, caspase-8 and caspase-10. In some types of cells (type I), processed caspase-8 directly activates other members of the caspase family, and triggers the execution of apoptosis of the cell. In other types of cells (type II), the Fas-DISC starts a feedback loop that spirals into increasing release of proapoptotic factors from mitochondria and the amplified activation of caspase-8. Activation of caspases ensure that the cellular components are degraded in a controlled manner, carrying out cell death with minimal effect to surrounding tissues.

The mitochondria are essential to multicellular creatures. The mitochondria pathway of apoptosis functions is in response to various types of intracellular stress including growth factor withdrawal, DNA damage, unfolding stresses in the ER and death receptor stimulation. Apoptotic proteins such as BCL-2 family proteins target mitochondria and affect them in different ways. They might lead to mitochondrial swelling and increase the permeability of the mitochondrial membrane, as a result, the apoptotic effectors will leak out. Also, the nitric oxide is able to induce apoptosis by helping to dissipate the membrane potential of mitochondria and therefore make it more permeable. Mitochondrial proteins known as second mitochondria derived activator of caspases (Smac) are released into the cell's cytosol, following the increase in permeability of the mitochondria membranes. Smac binds to proteins that inhibit apoptosis (IAPs), thereby deactivating them, and preventing the IAPs from arresting the process and therefore allowing apoptosis to proceed. IAP also normally suppresses the activity of a group of cysteine proteases called caspases, which carry out the degradation of the cell. Therefore, the actual degradation enzymes can be seen to be indirectly regulated by mitochondrial permeability.

Cytochrome C is also released from mitochondria due to formation of a channel, the mitochondrial apoptosis-induced channel (MAC), in the outer mitochondrial membrane, and serves a regulatory function as it precedes morphological change associated with apoptosis. Once cytochrome c is released, it binds with apoptotic protease activating factor-1 (Apaf-1) with ATP, which then binds to procaspase-9 to create a protein complex known as an apoptosome. The apoptosome cleaves the procaspase into its active form of caspase-9, which will activate the effector caspase-3 and leading apoptosis.

The ER is the organelle responsible for synthesis and folding of secreted and membranous protein and lipid biosynthesis. The ER stress response constitutes a cellular process that is triggered bya variety of conditions that disturb folding of proteins in the ER. The ER stress response is mediated by three sensors located at the ER membrane: ERN1, ATF6 and PERK/EIF2A3K. Accumulation of unfolded protein recruits BiP/HSP70 to the ER lumen and its dissociation from ERN1, ATF6 and PERK/EIF2A3K leads to their activation. ERN1 can recruit TRAF2 and ASK1, leading to downstream activation of JNK and p38 MAPK. Activated JNK translocates to the mitochondrial membrane and promotes activation of Bim and inhibition of Bcl-2. Bax and Bak bind to and activate IRE1α and induce release of Ca2+from the ER to mitochondria. Then PERK phosphorylates elF2α and attenuates protein translation. Activated ATF6 translocates to the Golgi and cleaved by the proteases, S1P and S2P. The cleaved ATF6 fragment forms an active transcriptional factor that mediates expression of several components important for protein folding, degradation, and ER expansion.

Many factors involved in the regulation of apoptosis. Some factors like Fas, TNFαR, DR3, DR4, DR5 receptors, p53 proteins and caspases promote apoptosis via receptor oligomerization, while some members of the Bcl-2 family like Bcl-2, Bcl-x1, Bcl-w, Mcl-1 proteins inhibit apoptosis.While members like Bax, Bak, Bad, Bid and Bim could promote apoptosis. Bcl-2 proteins are able to inhibit or promote apoptosis by direct action on MAC. Of all the three pathways above, caspases play an essential role in them. They finally activate caspases which leading to apoptosis. But there also exists a caspase-independent apoptotic pathway that is mediated by apoptosis-inducing factor (AIF).