Members of the transforming growth factor β (TGF-β) superfamily are highly conserved across animals. They are found in both vertebrates and invertebrates, are ubiquitously expressed in diverse tissues and function during the earliest stages of development and throughout life. The TGF-β superfamily of secreted factors comprises more than 30 members including activins, nodals, bone morphogenetic proteins (BMPs), and growth and differentiation factors (GDFs).

Members of the TGF-β superfamily exert their effects by binding to specific serine/threonine kinase type I and type II receptor complexes. These receptors, known as TGF-β type I and type II receptors, or TβR-I and TR-II, are structurally similar and include small disulfide-rich ectodomains that adopt a three-finger toxin fold (∼120 residues), single-spanning transmembrane domains (∼30 residues), and cytoplasmic serine-threonine kinase domains (∼400 residues) .

TGF-β family members are involved in a wide range of diverse functions and play key roles in embryogenesis, development and tissue homeostasis. TGF-β superfamily signaling is associated with a wide range of human pathologies including autoimmune and cardiovascular diseases, and cancer. 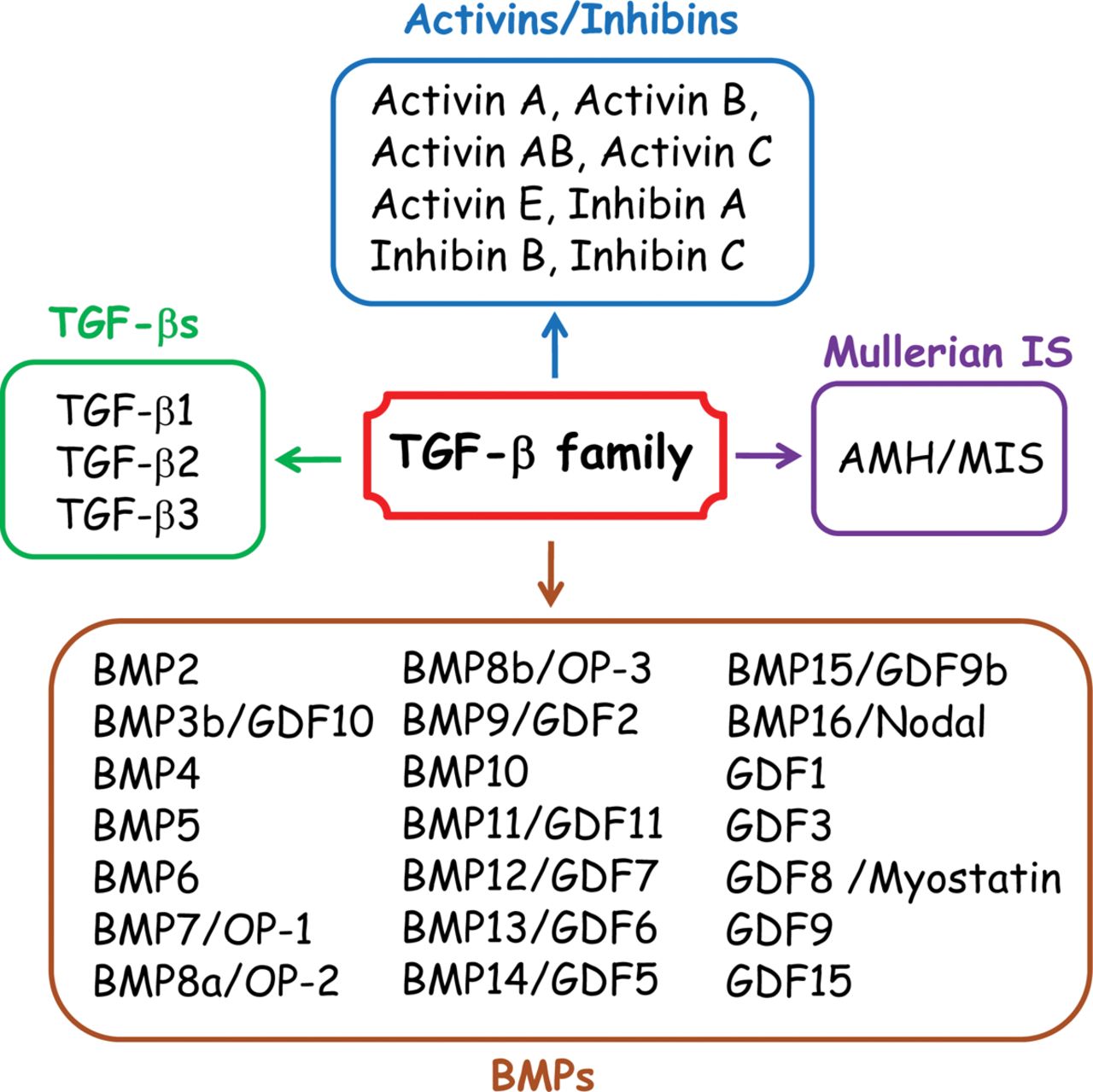 Cardiovascular diseases, such as coronary artery, atherosclerosis and hypertension, and resultant chronic heart failure (HF) reach epidemic proportions among the elder population. Aging is associated with an extensive loss of function at all levels of biological organization and the process is associated with a loss of tissue function through disrupted homeostatic and regenerative mechanisms. Studies using model organisms have generated significant insights into the genetic factors and environmental conditions that influence the age-related decline. Among the diseases and disorders associated with advancing age, one of the most debilitating is the loss of normal cardiac function leading to heart failure. HF is the quintessential disorder of cardiovascular aging, reflecting the convergence of age-related changes in the cardiovascular system and other organ systems and the increasing prevalence of cardiovascular diseases at older age, especially hypertension and coronary artery disease. Left ventricular hypertrophy is an important feature of cardiac aging, contributing to diastolic dysfunction and heart failure with preserved systolic function. The clinical manifestations and prognosis of these diseases and resultant heart failure also worsen with increased age.

Growth differentiation factor 11 (GDF11), a member of the transforming growth factor-b (TGF-b) superfamily, circulates in the bloodstream of mammals. A recent study showed that GDF11 levels were involved in the development of age-related diseases, such as age-related brain and skeletal muscle dysfunctions, and cardiac hypertrophy. It has been shown that GDF11 has a regenerative effect on cardiac hypertrophy, skeletal muscle, and brain.

An autopsy study of elderly subjects describes cardiomyocyte enlargement and decreased cardiomyocyte number, without a change in total myocardial mass, a pattern that was more pronounced in males. In a new study, the author found a gender-independent fashion that led to a reversal of cardiac myocyte hypertrophy and that this reduced cardiomyocyte size translated into a reduction in global cardiac mass.

The authors hypothesized that circulating factors specific to a young mouse might reverse cardiac aging. To verify this hypothesis, they used parabiosis to determine whether a specific type of cardiac hypertrophy related to aging was due to age-related differences in levels of a factor or factors in the blood. Parabiosis is an experimental paradigm used to study the role of blood borne factors in many cellular processes. In this technique, two mice are surgically joined and develop a shared blood circulation; therefore, the tissues of one mouse are exposed to its partner’s circulatory factors.

This heterochronic parabiosis set the basis for the investigation of the effects induced through exposure of an aged organism to a youthful systemic environment generated parabiotic pairs of young with old (heterochronic) mice and compared their heart sizes with those of parabiotic pairs of mice of the same age (isochronic) and those of age-matched controls that did not undergo parabiosis. After only 4 weeks, cardiac hypertrophy was reversed in the old heterochronically paired mice. Excluding the influence of parabiosis technique itself and changes in blood pressure, the heart weight-to-tibia length ratio and myocyte size showed a significant reduction in old mice exposed to a young circulation. 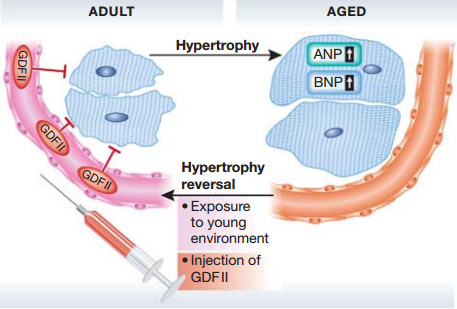 Fig.2 In adult mice, the presence of GDF11 in the systemic environment acts to restrain cardiac myocyte size. Exposure of aged mice to youthful systemic factors through parabiosis or injection of GDF11 reverses morphological and molecular markers (AMP and BNP) of age-induced cardiac hypertrophy. [1]

There were no significant differences between heterochronic and IP mice in either the metabolomic or the lipidomic screen. A broad-scale proteomics analysis revealed 13 analytes that reliably distinguished young mice from old mice, GDF11 emerged as a strong candidate from a series of screening analyses comparing the lipid profiles, metabolites, and signaling proteins present in young versus old plasma. Comparing the GDF11 ex

To demonstrate that GDF11 was a negative regulator of cardiac myocyte hypertrophy, these authors injected recombinant GDF11 daily for 30 days in aged mice using a blinded, randomized study design. Heart weight and cardiomyocyte area were reduced without affecting cardiac function.

Thus rGDF11 therapy led to a significant regression of cardiac hypertrophy in old mice, as indicated by both heart weight measurements and morphometric analyses. The study suggesting that raising GDF11 levels could potentially treat or prevent agerelated cardiac hypertrophy.