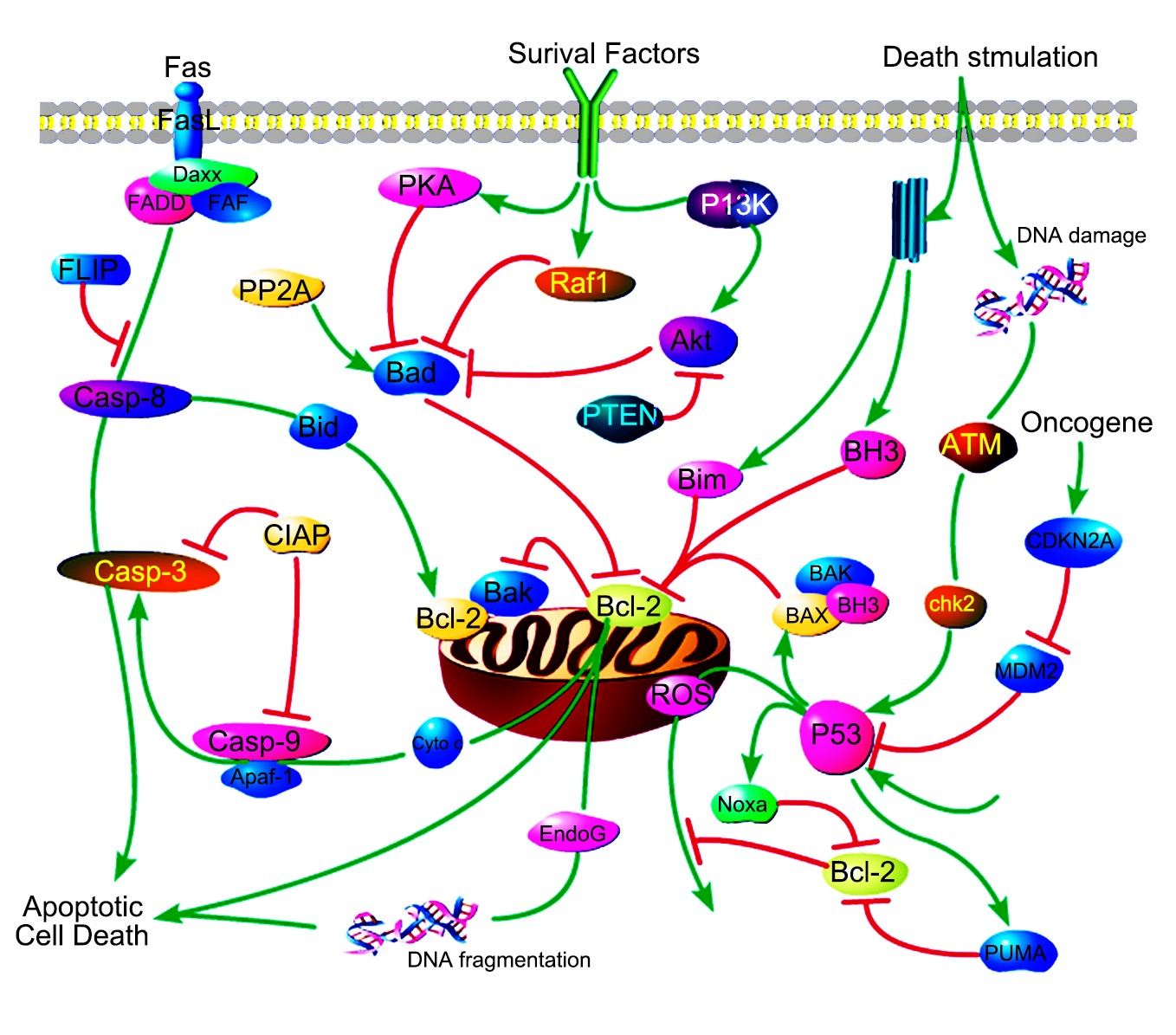 Apoptosis is a highly regulated programmed cell death (PCD), it is vital to the development and homeostasis of multicellular organisms. Among various organelles, mitochondria play a central role in the regulation of apoptotic cell death. Under a certain death stimuli, different apoptogenic factors, like cytochrome c, AIF and Smac, will be released during the early stages of apoptosis. Caspases are a family of cysteine proteases triggered by apoptosis signaling. The culmination ofcaspasecascade is the cleavage of a number of proteins in the cell, followed by cell disassembly,cell death, and, ultimately, the phagocytosis and removal of the cell debris. The caspasecascade can be activated by two distinct routes: one from cell surface and the other from mitochondria. The mitochondrial pathway of apoptosis, also called theintrinsic pathway, is the most common mechanism of apoptosis in vertebrates.

The apoptotic signals that are channeled through the mitochondrial pathway of apoptosis include various stresses like DNA damage, oxidative, stress, UV radiation, protein kinase inhibition, and growth factor deprivation. Ultra-low level of apoptogenic factors was able to activate the caspases. Once activated, caspases will attack mitochondria with a positive feedback, as a result, more cytochrome c will leak out, and eventually, cause mitochondrial dysfunction with mitochondrial electron transport chain disruption, increasing intracellular ROS and ATP generation disability.

Apoptotic stimuli are relayed to mitochondria via the pro-apoptotic proteins of the Bax/Bak group, which will translocate from the cytosol to the outer membrane of the mitochondria upon receipt of the appropriate stimuli, and thereby allow the release of different mitochondrial proteins that are normally present in the intermembrane space of the seorganelles. Of these proteins, cytochrome c is most important for triggering further downstream apoptotic events.

The apoptosome requires ATP for its formation and is able to cleave and activate procaspase-3, which is an effector caspase. The adaptor protein Apaf1 appears to play a major structural role in this assembly. Apaf1 contains WD motifs for interaction with cytochrome c and a CARD motif, which directs binding to the CARD motifs of procaspase-9 and procaspase-3. Structural studies on the apoptosome by electron microscopy have revealed a wheel shaped heptameric complex, with the CARD domains of Apaf-1 located at the central hub and the WD40 repeats at the extended spokes. The location of procaspase 9 in this complex is still open as is the mechanism of caspase 9 activation. The activation of caspase-9 by apoptosome formation sets in motion a cascade of caspase activation events. At the top of this cascade is caspase 3, which cleaves other downstream effector procaspases (caspases-2, -6, -8 and -10) or apoptotic substrates containing the recognition motif DXXD. Activation of this hierarchically structured cascade leads to proteolyis of multiple substrates, and the cell is committed to death. The cellular infrastructure is destroyed, and changes at the plasma membrane are triggered that promote engulfment by phagocytes.

In addition to cytochrome c, other soluble proteins contained in the inter-membrane space of mitochondria are released through the outer membrane and participate in the organized destruction of the cell, too. Among these proteins are the apoptosis inducing factor (AIF), endonuclease G, and the second mitochondria derived activator of caspase (Smac)/Diablo proteins. The AIF protein hasbeen shown to be responsible for triggering a pathway of programmed cell deaththat is distinct from the caspase pathways. Endonuclease G translocates during apoptosis from the mitochondrion to the nucleus, where it cleaves chromatin DNA intonucleosomal fragments about 50Kb independently of caspases. Smac/Diablo is also released from the mitochondria along with cytochrome c during apoptosis, and it functions to promote caspase activation by inhibiting Inhibitor of apoptosis family proteins (IAPs). Smacs prevent the IAPs from arresting the apoptotic process and therefore allowing apoptosis to proceed. IAPs also suppress the activity of caspases, which carry out the degradation of the cell.

Apoptosis regulators like BCL-2 and Bcl-2 homology (BH) are family of evolutionarily related proteins. These proteins govern mitochondrial outer membrane permeabilization (MOMP) and can be either pro-apoptotic (Bax, Bad, Bak and Bok among others) or anti-apoptotic (including Bcl-2 proper, Bcl-xL, and Bcl-w, among an assortment of others). Mitochondria can release intermembrane space (IMS) proteins through two different mechanisms: through a surgically precise permeabilization of the outer membrane mediated by Bcl-2 family members; or through induction of the mitochondrial permeability transition (PT), occurring mainly in response to the release of Ca2+ from endoplasmic reticulum (ER) stores. Bcl-2-family proteins also regulate this pathway through their localization at the ER.

Bcl-2-family members share one or more Bcl-2 homology domains and are divided into two main groups according to whether they promote or inhibit apoptosis. The pro-apoptotic family members are further classified according to whether they contain multiple BH domains or only BH3. All pro-apoptotic proteins contain a BH3 domain (except for Bad) necessary for dimerization with other proteins of Bcl-2 family and crucial for their killing activity, some of them also contain BH1 and BH2 domains (Bax, Bak). All anti-apoptotic proteins contain BH1 and BH2 domains, some of them contain an additional N-terminal BH4 domain (Bcl-2, Bcl-x(L), Bcl-w), which is never seen in pro-apoptotic proteins, except for Bcl-x(S). BH3-only family of proteins includes those of the Bcl-2 family proteins, which contain only a single BH-domain. The BH3-only family members play a key role in promoting apoptosis. The BH3-only proteins are proapoptotic and require the co-operation of their multidomain relatives to induce apoptosis. The activation of BH3-only proteins, which activate or de-repress the BH1–3 proteins, such as Bax and Bak, produce mitochondrial outer membrane permeabilization. Consequently, pro-apoptotic proteins from the intermembrane space are released into the cytoplasm, where they activate or de-repress caspases, leading to apoptosis.