Proteoglycan (PG) is a special type of glycoprotein that is covalently linked by one or more glycosaminoglycans and a core protein. In addition to glycosaminoglycan chains, proteoglycans have some N- or (and) O-linked oligosaccharide chains. Proteoglycans are not only distributed in the extracellular matrix, but also in the secretory granules on the cell surface as well as in the cells.

Proteoglycan is a complex carbohydrate composed of a covalent bond between a protein and a glycosaminoglycan. The polysaccharide is generally more abundant than the proteoglycan. It is one of the main components of connective tissue and is produced by connective tissue-specific cells or fibroblasts and chondrocytes. Its main function is to embed or coat the fibrous component (collagen and elastin) of connective tissue, and it can also be used as a pad tissue to smooth the joints. Proteoglycan is a kind of glycoconjugate composed of core protein and one or more covalently linked amino glycans. It is an important component of cell membrane, basement membrane, especially extracellular matrix, and the structure of tissue cells. It is closely related to the function. Proteoglycans are a class of compounds consisting of aminoglycans and core proteins, which have a sugar content of more than 95%, and thus are more chemically similar to polysaccharides than proteins, and are actually protein-containing polysaccharides. 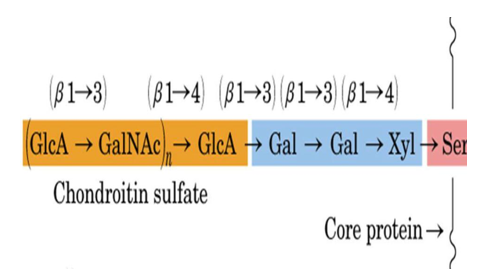 The GAG chains of most PGs contain repeating disaccharide units consisting of a hexosamine, either D-glucosamine (GlcN) or D-galactosamine (GalN) and a hexuronic acid, either D-glucuronic acid (GlcA) or L-iduronic acid (IdoA), or in the case of keratan sulfate, the hexuronic acid unit is replaced with a galactose unit. GAG chains are arranged in unbranched, repeating units which can be sulfated in various positions. As indicated earlier, there is extreme diversity among proteoglycans. For example, the core protein size can range from 10 kDa to greater than 500 kDa, the number of GAG chains may range from 1 to over 100, and PGs may be hybrid molecules containing GAG chains of more than one type. The most common GAG chains include the galactosaminoglycans, chondroitin sulfate (CS) and dermatan sulfate (DS), and the glucosaminoglycans, heparan sulfate (HS), keratan sulfate (KS) and heparin, as well as hyaluronan (HA) which is a protein-free unsulfated GAG chain.

The sugar and sulfate components of the proteoglycans are transported into the cell through membrane transporters, activated in the cytosol to nucleotide sugars and PAPS, and translocated via transporters into the ER or the Golgi lumen. The energy for the transfer reaction is provided by nucleotide sugars and specificity for donor and acceptor is provided by the enzymes catalyzing the different transferase reactions. GAG biosynthesis is initiated by the transfer of xylose from UDP-xylose to a hydroxyl group of specific serine residues within the core protein, catalyzed by xylosyltransferase. Xylose addition is considered the rate limiting step in GAG biosynthesis, and occurs early in the proteoglycan transport though the secretory pathway, most likely in an ER to golgi intermediate compartment. Xylose is the first sugar in the GAG-protein linkage region (serxylose- galactose-galactose-glucuronic acid), which is common to chondroitin sulfate, dermatan sulfate and heparan sulfate. Following the linkage region, disaccharide units which characterize the GAG chain are added as alternating monosaccharides to the non-reducing end of the elongating chain. Frequently the GAG chains are modified, by phosphorylation of C-2 of xylose, epimerization of glucuronic acid to iduronic acid, and sulfation at various positions catalyzed by specific sulfotransferases.

The cartilage aggrecan can form a typical proteoglycan aggregate with HA molecules as the main component. Each aggrecan molecule (average Mr~2.5 million) contains about 50 KS chains (Mr 10,000 to 15,000), about 100 CS chains (Mr 20,000 to 30,000) and several O-linked oligosaccharide chains. They are distributed in different regions of the core protein (Mr200,000 to 300,000), and the whole molecule is shaped like a "tube brush". There is a regular binding of a proteoglycan monomer (i.e., one core protein plus bound glycosaminoglycans, said monomer is relative to aggregates) at a predetermined interval of about 40 nm on the HA (Mr~2 million) backbone. Aggrecan is important for maintaining the morphology and function of cartilage. 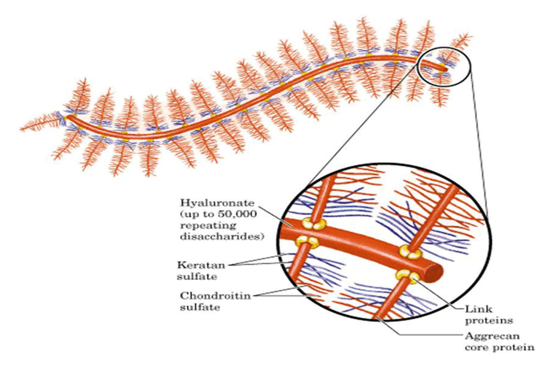 Proteoglycan can be carried out under the catalysis of a series of extracellular enzymes or intracellular enzymes in lysosomes. Enzymes that hydrolyze sugar chains include endoglycosidases and exoglycosidases, which catalyze the hydrolysis of glycosidic chains in the sugar chain and at the non-reducing ends of the sugar chain, respectively. Hyaluronidase is the most understood endoglycosidase. The hyaluronidase produced by sperm cells is necessary for fertilization through the egg membrane. The hyaluronidase secreted by bacteria plays an important role in invading host tissues. The sulfate group in the aminoglycan is hydrolyzed by sulfatase catalyzed hydrolysis. Desulfurization is often the rate-limiting step in the degradation of aminoglycan sugar chains. The glycosidase does not function without desulfurization. The degradation process of the core protein and the conjugated protein is the same as that of the general protein.