Chromatin is a complex of DNA and protein found in eukaryotic cells. Its main function is to pack long DNA molecules into tighter, denser shapes, thereby preventing chain entanglement and enhancing DNA during cell division, preventing DNA damage and regulating gene expression and DNA replication. During mitosis and meiosis, chromatin promotes the correct separation of late chromosomes. The characteristic shape of the chromosome visible at this stage is the result of the DNA being curled into a highly concentrated chromatin network. The main protein component of chromatin is histone, which binds to DNA and acts as an "anchor" around which the chain is wrapped. Generally, chromatin tissue is divided into three levels:

2. A variety of histones are encapsulated in 30 nanometer fibers consisting of the closest form of nucleosome array (heterochromatin).

Figure 1. The major structures in DNA compaction: DNA, the nucleosome, the 10 nm "beads-on-a-string" fibre, the 30 nm chromatin fibre and the metaphase chromosome.

In fact, DNA can form three structures, namely A-, B- and Z-DNA. A-DNA and B-DNA are very similar, forming a right-handed helix, while Z-DNA is a left-handed helix with a zigzag phosphate backbone. Due to the nature of the linkage between B- and Z-DNA, Z-DNA is thought to play a specific role in chromatin structure and transcription. At the junction of B-DNA and Z-DNA, a pair of bases are flipped out of the normal bond. They serve the dual role of many protein recognition sites and serve as a convergent region of torsional stress produced by RNA polymerase or nucleosome binding. 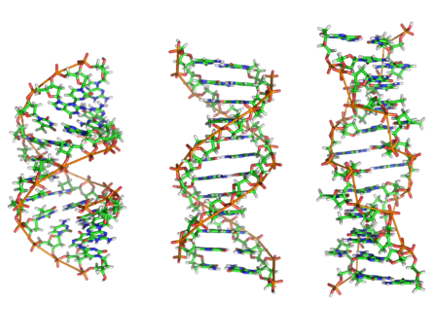 The basic repetitive element of chromatin is the nucleosome, which is interconnected by the various portions of the linker DNA, which are arranged much shorter than the pure DNA in solution. In addition to the core histones, there is a linker histone H1 that contacts the exit/inlet of the DNA strand on the nucleosome. The nucleosome core particle together with histone H1 is called a chromosome. Under non-physiological conditions, nucleosomes with about 20 to 60 base pairs of linker DNA can form "beads" fibers of about 10 nm. Nucleosomes bind non-specifically to DNA based on their functional requirements in general DNA packaging. However, there is a large DNA sequence preference that controls nucleosome localization. This is mainly due to the different physical properties of different DNA sequences: for example, adenine and thymine are more advantageously compressed into internal small grooves. This means that nucleosomes can preferentially bind at approximately one position per 10 base pairs (helix repeats of DNA), at which position the DNA is rotated to maximize the number of A and T bases located in the internal minor groove. 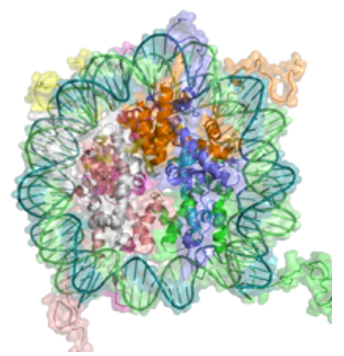 Figure 3. A cartoon representation of the nucleosome structure. From PDB: 1KX5.

Chromatin and its interaction with enzymes have been studied and it has been concluded that it is related to gene expression and is an important factor. According to Vincent G. Allfrey, a professor at Rockefeller University, RNA synthesis is associated with histone acetylation. Lysine amino acids attached to the ends of histones are positively charged. The acetylation of these tails will make the chromatin ends neutral, allowing DNA to enter. When chromatin decondenses, DNA readily enters the molecular mechanism. Fluctuations between open chromatin and blocked chromatin may result in discontinuities in transcription or transcriptional bursts. Other factors may be involved, such as the association and dissociation of transcription factor complexes with chromatin. Contrary to a simple transcriptional probability model, this phenomenon can explain the high variability of gene expression that occurs between cells in an isogenic population.

Although little is known about the assembly, structure and function of chromatin, it is necessary to have a clear understanding of these processes as they are inherent in human disease analysis, including many cancers that are involved in defects in chromatin utilization. Our understanding of chromatin assembly after DNA replication is that initiation occurs by introducing newly synthesized histones into the nucleus. Immediately after this event, a rapid multi-step process involving the initial deposition of heterotetramers of histones H3 and H4 followed by the incorporation of two histone H2A and H2B heterodimers to complete the nucleosomes was performed. Then, in addition to other chromatin assembly factors, ATP is required to establish the regular spacing of the assembled nucleosomes. Binding of the linker histones is accompanied by folding of the intact nuclei to form selenoonitrile or 30 nm fibers. Subsequent inconsistency folding events occur that produce a complete structural organization of chromatin in the nucleus. The process of assembling DNA into chromatin is regulated by a variety of factors as well as other defined and undefined events occurring in the cell. Some of the currently defined events include variations that occur within the essential components involved in chromatin tissue, namely, histone variants and modifications. In addition, the regulation of chromatin assembly depends on whether it occurs during DNA replication or outside of DNA replication. In this way, the concept of regulating chromatin assembly must be analyzed for different events, participants and factors involved in each of the different aspects of chromatin assembly.