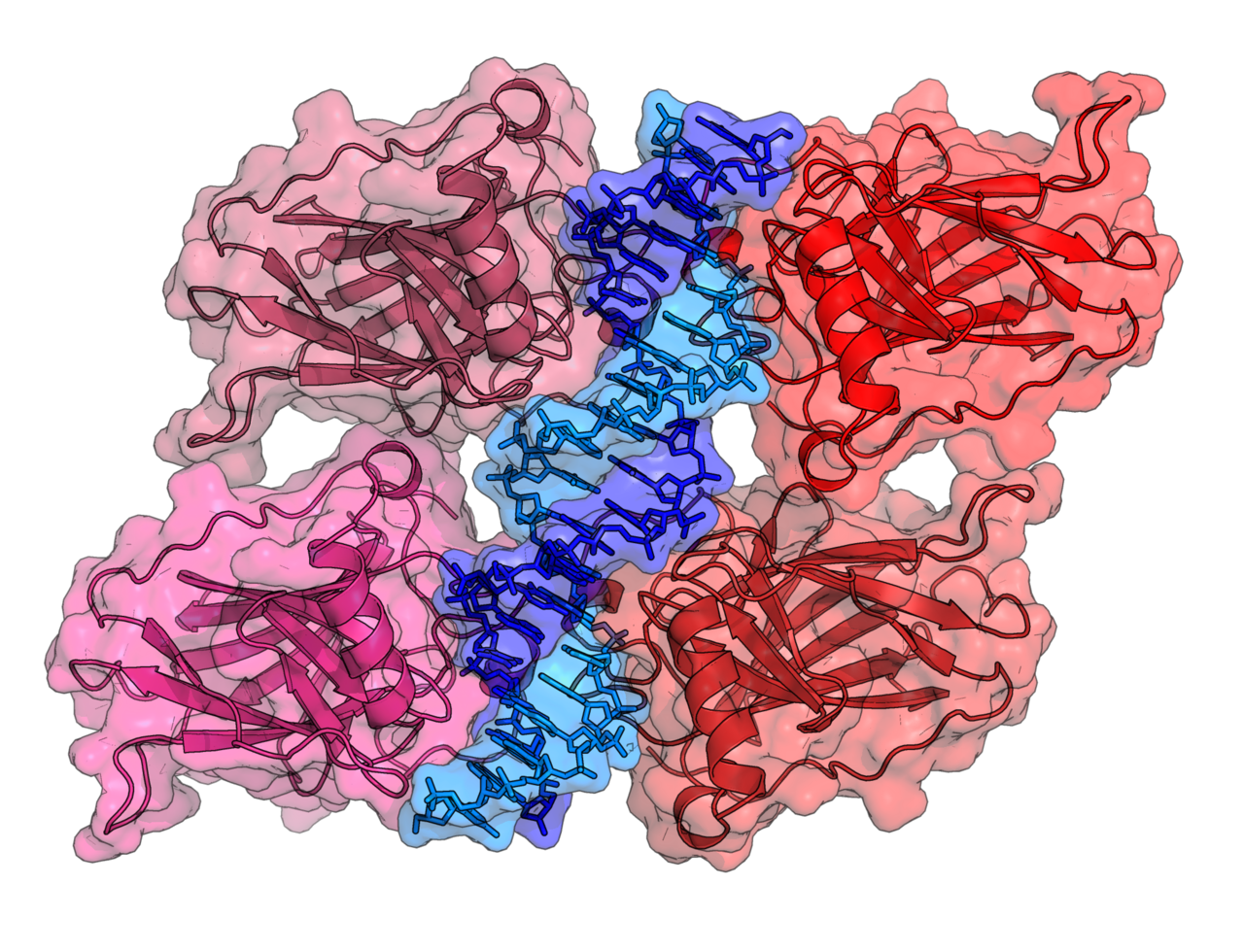 The p53 protein, also known as tumor protein p53, phosphoprotein p53, tumor suppressor p53, antigen NY-CO-13, or transformation-related protein 53 (TRP53), is a tumor suppressor that is encoded by the TP53 gene in humans. p53 is a protein with a molecular weight of 43.7 kDa, but was named p53 because the protein band appeared at 53 KDa as shown by Marker. Inactivation of the p53 gene plays an important role in tumor formation. p53 is an important anti-cancer gene that can make cancer cells apoptotic, thereby preventing cancer, and also has the function of helping cells to repair defects.

p53 is a tumor suppressor gene. In all malignant tumors, more than 50% of the mutations in this gene occur. The protein encoded by this gene is a transcriptional factor that controls the initiation of the cell cycle. Whether or not to start cell division is determined by p53. If the cell is damaged and cannot be repaired, the p53 protein will be involved in the initiation process, causing the cell to die in apoptosis. Cells with p53 deficiency do not have this control and continue to divide even under adverse conditions. Like all other tumor suppressors, the p53 gene normally slows or monitors cell division.

The p53 protein is mainly distributed in the nucleoplasm of cells and can specifically bind to DNA. Its activity is regulated by post-translational modifications such as phosphorylation, acetylation, methylation and ubiquitination. The biological function of normal p53 is similar to the "guardian of the genome", which examines DNA damage points in the G1 phase and monitors the integrity of the genome. In the event of damage, the p53 protein prevents DNA replication to provide sufficient time for repair of damaged DNA. If the repair fails, p53 protein triggers apoptosis. If the p53 gene is mutated, the proliferation of the cells is out of control, leading to cell carcinogenesis.

The p53 gene was genetically localized in animals such as humans, monkeys, chickens and mice. The human p53 gene is located at 17P13.1, and the mouse p53 is located on chromosome 11, and a non-functional pseudogene is found on chromosome 14. In animals with different degrees of evolution, p53 has an abnormally similar gene structure, about 20 kb, consisting of 11 exons and 10 introns, the first exon is not encoded, exons 2, 4, 5, 7, and 8, respectively, encode five evolutionarily highly conserved domains. The p53 gene is transcribed into 2.5 kb of mRNA, encoding a protein of 393 amino acids with a molecular weight of 53 kD.

The expression of the p53 gene is regulated by at least two levels of transcription and post-transcription. The mRNA level of p53 is very low in cells that have stopped growing or non-transformed, but mRNA is significantly increased after cytosol stimulation. In the continuously growing cells, the mRNA level of p53 did not change significantly with the cell cycle, but the mRNA level decreased after induction of differentiation. The transcription of the p53 gene is controlled by two promoters, P1 and P2. The P1 promoter is located upstream of the first exon, and P2 is located within the first intron, and contains a binding site for the NF1 protein and a binding site for the transcription factor AP1 associated protein.

The p53 gene is located on human chromosome 17 and contains 11 exons. The wild-type p53 protein consists of 393 amino acid residues and contains multiple functional domains. The N-terminal transcriptional activation domain (AD) AD1 and AD2 are located at amino acids 1-50 and bind to the universal transcription factor TF11D to function as a transcriptional activator. TF11D is a complex composed of TBP (TATA binding protain) and TAF (TBP associated factor). p53 binds to TAF and acts on the TATA box in the downstream gene promoter to achieve transcriptional activation. The p53 gene growth-suppressing domain is rich in proline and contains five repeating pxxp sequences that interact with proteins containing the SH3 domain to link p53 to the message-transport pathway. The p53 protein also includes a sequence-specific DNA binding domain, a nuclear localization signal (NLS) domain, a tetramerization domain, and a C-terminal non-specific DNA regulatory domain.

Figure 1. A schematic of the known protein domains in p53.

Both intrinsic and extrinsic stresses to the cell can act upon the p53 pathway, including DNA damage, hypoxia, ribosome biogenesis, rNTP depletion, spindle damage, heat or cold shock, nitric oxide (NO), and oncogene activation. Theses stress signals activate the p53 pathway through various mediators. For example, gamma-radiation activates the ATM kinase and the CHK-2 kinase, both of which can phosphorylate the p53 protein, while UV-radiation activates ATR, CHK-1 and casein kinase-2, which results in the modification of different amino-acid residues on the p53 protein. Phosphorylation at the serine and threonine residues and acetylation, methylation, ubiquitination or sumolation at the epsilon amino groups of lysines, mostly at the carboxy-terminal domain of the p53 protein, produce a combinatorial set of modifications that may well be specific to the type of stress acting upon the cell. In this way, the location on the protein and the chemical nature of the protein modification on a single protein, p53, may integrate the collection of stress signals that the cell must cope with in its life cycle. Other types of stress signals also result in different patterns of p53 protein modifications.

The major negative regulator of p53 is the Mdm2 proto-oncogene. Mdm2 is transcriptionally induced by p53, thus p53 triggers its own destruction through a negative feedback loop. This feedback loop leads to oscillations in the expression of both proteins following DNA damage. These oscillations may enable a more effective execution of a reversible p53 response. The importance of Mdm2 in this negative regulation is demonstrated by the lethal effect during early stages of embryonic development of mdm2 knockout mice. The early mortality of these mice is abolished by the simultaneous inactivation of p53. Overexpression of Mdm2 in many cancers is often sufficient to inactivate p53 without further mutation. Similarly, mere loss of Mdm2 is sufficient to induce p53-mediated apoptosis in vivo.26 Therefore, Mdm2 is critical for keeping p53 in check.

Once the p53 protein is activated, it initiates a transcriptional program that reflects the nature of the stress signal, the protein modifications and proteins associated with the p53 protein. The genes in this p53 network initiate one of three programs that result in cell cycle arrest (G-1 or G-2 blocks are observed), apoptosis, inhibition of angiogenesis and metastasis, or DNA repair (Figure 2). 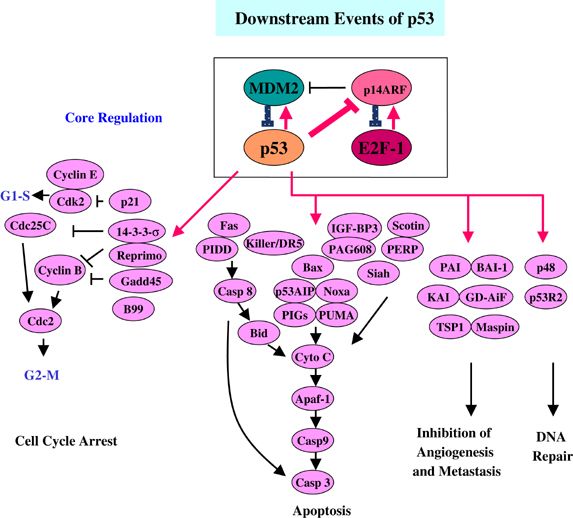 In the cell cycle, the regulation of P53 is mainly reflected in the monitoring of G1 and G2/M phase correction points, which is closely related to transcriptional activation. The downstream protein of p53 is p21, which is a cyclin-dependent protein kinase inhibitor. On the one hand, p21 binds to a series of cyclin-CDK complexes, inhibiting the corresponding protein kinase activity, resulting in the inability of cyclin-CDK to phosphorylate Rb. The non-phosphorylated state of Rb maintains binding to E2F, making E2F, a transcriptional regulator, incapable of activation, causing G1 arrest. In addition, the other three downstream genes of p53, cyclin B1, CADD45 and 14-3-3σ, are involved in G2/M phase arrest. p53 down-regulates Cyclin B1 expression, and cells cannot enter M phase. CADD45 acts by inhibiting the activity of the cyclin B1-CDK2 complex. 14-3-3σ binds to cdc25c and interferes with the transcriptional regulation of the cyclin B1-CDK2 complex.

Through Bax/Bcl2, Fas/Apol, IGF-BP3 and other proteins, p53 can regulate the apoptosis. Bcl-2 prevents apoptosis-forming factors such as cytochrome c from being released from mitochondria and has an anti-apoptotic effect. Bax interacts with voltage-dependent ion channels on mitochondria, mediates the release of cytochrome c, and has an apoptotic effect. p53 can up-regulate the expression level of Bax and down-regulate the expression of Bcl-2 to promote apoptosis. p53 also induces apoptosis via the death signaling receptor protein pathway. 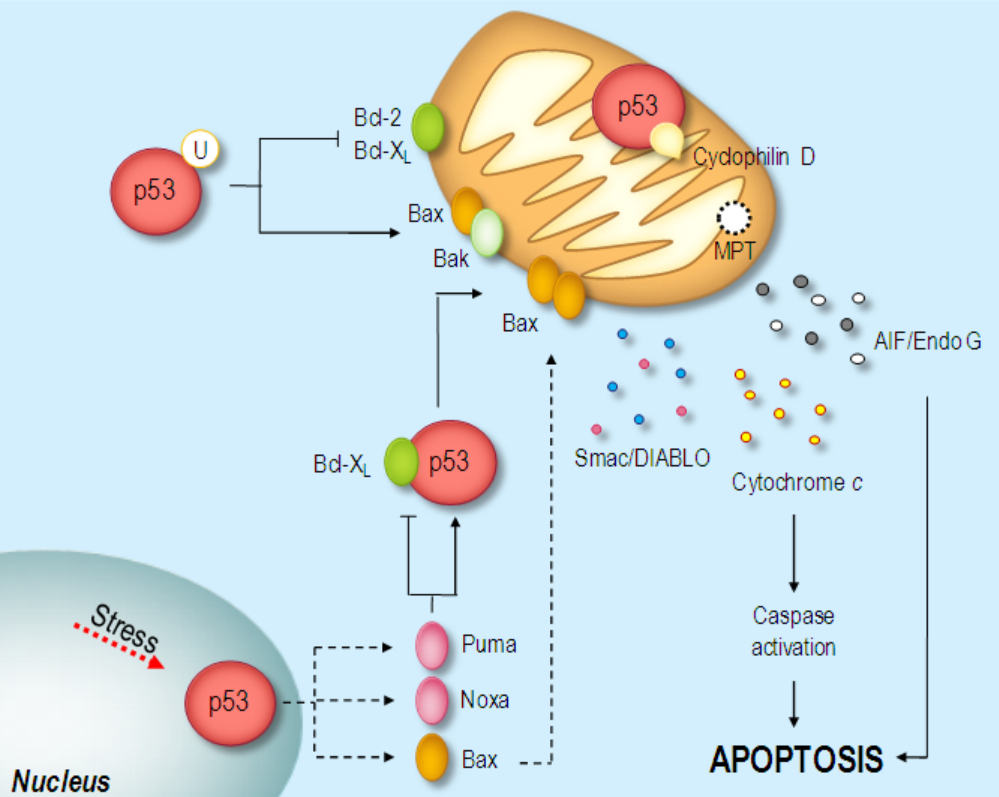 After the tumor grows to a certain extent, proangiogenic factors can be formed through the autocrine pathway, which stimulates the proliferation of nutrient vessels in the parenchyma. p53 protein can stimulate the expression of angiogenic gene Smad4 and inhibit tumor angiogenesis. In the stage of tumor progression, mutation of p53 gene leads to neovascularization, which is conducive to the rapid growth of tumors, often the performance of advanced tumors.

After DNA damage, the accumulation of mismatch repairs leads to genomic instability and altered genetic information. p53 can participate in the DNA repair process. Its DNA binding domain has endonuclease activity, which can cleave mismatched nucleotides, bind to and regulate the activity of nucleotide endonuclease repair factors XPB and XPD, and affect DNA recombination and repair. p53 also plays a role in DNA repair by forming a complex with p21 and GADD45 and utilizing its exonuclease activity. DNA damage occurs in cells exposed to UV irradiation. Signal transduction pathways are activated repair the damage, including the NER pathway. Before UV exposure, p53 binds hRRM2 and p53R2, and they are located in the cytoplasm, as is hRRM1. In response to UV, the binding affinity between p53 and the small ribonucleotide reductase (RR) subunits decreases. All of the RR subunits translocate to the nucleus and the active tetrameric RR complex forms. RR holoenzyme catalyzes the conversion of NDPs to dNDPs. The dNDPs are phosphorylated to generate dNTPs that can be used to repair the damaged DNA. 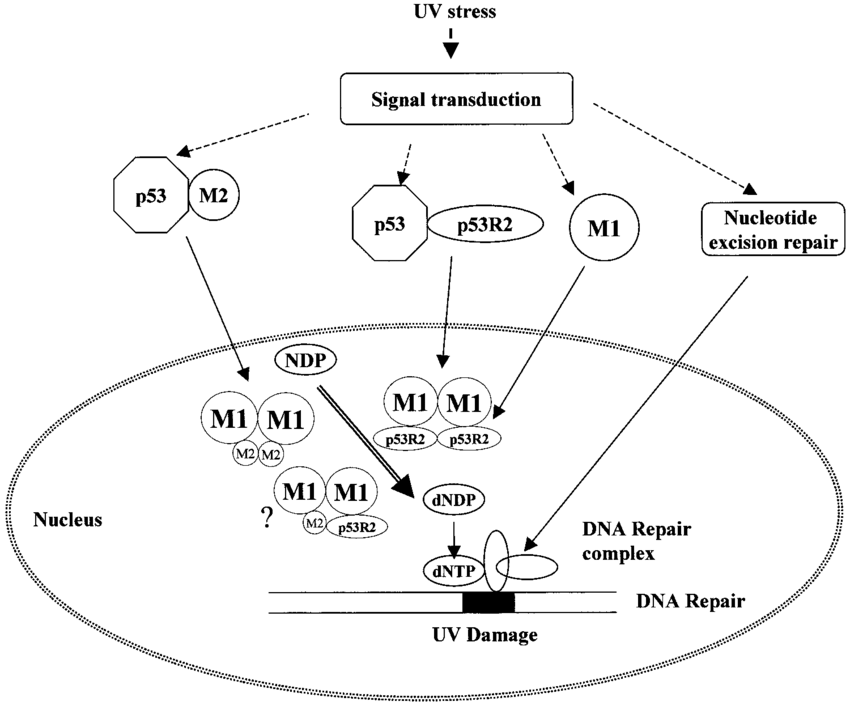 Some proteins can interact with p53 proteins, leading to the loss of their normal biological functions. DNA tumor viruses such as HPV16, HPV18, SV40 and adenovirus encode oncoproteins, causing malignant lesions in host cells. These oncoproteins such as SV40T antigen, adenovirus ELa, ELb, HPVE6 can bind to Rb and p53. For instance, after HPVE6 binds to p53, it initiates intracellular protease degradation of p53, thereby reducing the normal function of p53. In addition, p53 can also be inactivated by cellular gene product, such as MDM2 can bind to p53 and inactivate it. In some common human sarcomas, there is MDM2 gene amplification, which may interfere with the normal function of p53.

The most important way to lose the normal function of p53 is gene mutation. It is confirmed by a large number of mutants in the tumor that most of the mutations are missense mutations located in one of the four mutation hot spots. The four mutation hotspots are aa129～146, 171～179, 234～260, 270～287, which correspond to the most conservative segment of p53 gene evolution. In vitro experiments confirmed that the mutant lost the ability to bind to a specific site. In addition, mutants can also alter the spherical conformation of p53.