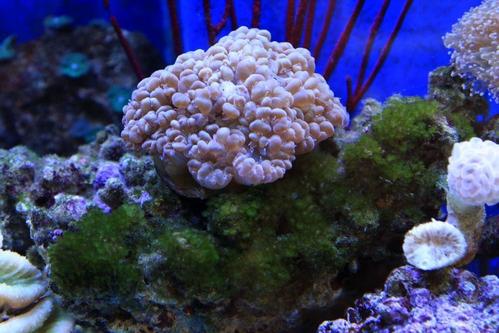 R-Phycoerythrin (R-PE), a fluorescent protein from the light-harvesting phycobili protein family, is isolated from red algae and cryptophytes accessory to the main chlorophyll pigments responsible for photosynthesis. Its primary absorption peak is at 565 nm with secondary peaks at 496 and 545 nm. The broad excitation spectrum provides the advantage for multi-color immunofluorescent staining or cell sorting.

Like all phycobiliproteins, it is composed of a protein part covalently binding chromophores called phycobilins. In the phycoerythrin family, the most known phycobilins are phycoerythrobilin, the typical phycoerythrin acceptor chromophore, and sometimes phycourobilin. Phycoerythrins are composed of (αβ) monomers, usually organized in a disk-shaped trimer (αβ)3 or hexamer (αβ)6. These typical complexes also contain a third type of subunit, the γ chain.

R-PE and the closely related BPE are the most intensely fluorescent phycobiliproteins having orange fluorescence. They are significantly brighter and more photostable than conventional organic fluorophores.

R-PE is useful in the laboratory as a fluorescence-based indicator for the presence of cyanobacteria and for labeling antibodies, most often for flow cytometry. Its use is limited in immunofluorescence microscopy due to its rapid photobleaching characteristics. There are also other types of phycoerythrins, such as B-Phycoerythrin, which have slightly different spectral properties.

Allophycocyanin (APC), is a protein from the light-harvesting phycobiliprotein family, along with phycocyanin, phycoerythrin, and phycoerythrocyanin. It is an accessory pigment to chlorophyll. APC is isolated from red algae or blue-green algae that exhibits far-red fluorescence with high quantum yields, each producing slightly different forms of the molecule. It is composed of two different subunits (α and β) in which each subunit has one phycocyanobilin (PCB) chromophore. The subunit structure for APC has been determined as (αβ)3.

It is excited by laser lines at 594 and 633 nm, with an absorbance maximum at 650 nm and a fluorescence emission peak at 660 nm.To be effectively used in applications which require high sensitivity but not photostability,such as FACS, High-Throughput Screening (HTS) and microscopy, APC needs to be chemically cross-linked.

In practical applications, the sensitivity of APC conjugates is usually 5 to 10 times greater than that of the corresponding fluorescein conjugate.

Creative BioMart offers a variety of R-PE or APC conjugated recombinant proteins, which are convenient for your research assay. Featured conjugated products are listed in the left column, please contact us for more details or more protein information. We could conjugate specific recombinant proteins according to your custom requirements.