The B cell lymphoma 2 (BCL‑2) gene family encodes more than 20 proteins that have a central role in regulating programmed cell death by controlling pro-apoptotic and anti-apoptotic intracellular signals, and are fundamental to the balance between cell survival and death [1-3].

BCL2 was initially discovered as part of the t(14;18) chromosomal translocation, which occurs in patients with follicular lymphoma and diffuse large B cell lymphoma (DLBCL), and leads to elevated BCL2 transcription [4-5]. Although originally believed to act as a classical growth-driving oncogene, it was later shown that BCL2 instead promotes malignant cell survival by attenuating apoptosis [6-7]. Members of the BCL‑2 family are grouped together, as they contain up to four con­served BCL‑2 homology (BH) regions. The multi-region (BH1–4) anti-apoptotic proteins BCL‑2, BCL‑XL (also known as BCL‑2L1), BCL‑W (also known as BCL‑2L2), myeloid cell leukaemia 1 (MCL1) and A1 (also known as BCL‑2A1) antagonize pro-apoptotic BH3‑only proteins, and they inhibit the essential apoptosis effectors BCL‑2 antagonist killer [7] (BAK) and BCL‑2‑associated X protein (BAX) [8]. BCL2 dysregulation results in the overexpression of the anti-apoptotic protein BCL‑2, which alters the bal­ance between pro-apoptotic and anti-apoptotic mem­bers of the BCL‑2 family [9]. 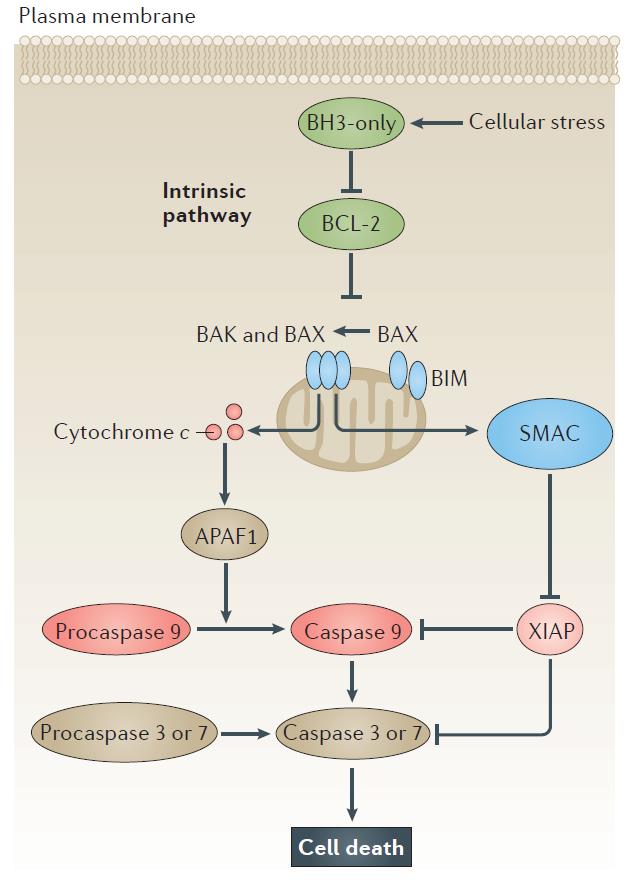 Programmed cell death, or apoptosis, is critical to both development and maintenance of tissues, as well as to the destruction of the cell when injured. The BCL-2 family proteins and the inhibitors of apoptosis proteins (AIPs) are the major regulators of the apoptotic process, whereas caspases, a family of cysteine proteases, are the major executioners of this process [16]. Following activation of the intrinsic pathway by cellular stress, pro-apoptotic BCL‑2 homology 3 (BH3) ‑only proteins inhibit the anti-apoptotic proteins B cell lymphoma 2 (BCL‑2), BCL‑XL, BCL‑W and myeloid cell leukaemia 1 (MCL1). The subsequent activation and oligomerization of the pro-apoptotic proteins BCL‑2 antagonist killer 1 (BAK) and BCL‑2‑associated X protein (BAX) results in mitochondrial outer membrane permeabilization (MOMP). This results in the release of cytochrome c and second mitochondria-derived activator of caspase (SMAC; also known as DIABLO) from the mitochondria. Cytochrome c forms a complex with procaspase 9 and apoptosis protease-activating factor 1 (APAF1), which leads to the activation of caspase 9. Caspase 9 then activates procaspase 3 and procaspase 7, resulting in cell death. Inhibition of this process by anti-apoptotic BCL‑2 proteins occurs via sequestration of pro-apoptotic proteins through binding to their BH3 motifs. BIM, BCL‑2‑interacting mediator of cell death; XIAP, X‑linked inhibitor of apoptosis. [15, 17]

Nowadays, studies showed that the inhibition of apoptosis related Bcl-2 family proteins is thought to lead to chemoresistance [10] and has been identified in many cancers, including haematological malignancies [11] (such as multiple myeloma, chronic lymphocytic leukaemia (CLL), acute lymphocytic leu­kaemia (ALL), acute myeloid leukaemia (AML), myelodysplastic syndrome and myeloproliferative neoplasms) and solid tumours (such as breast cancer [12], lung cancer [13], melanoma [14] and mesothelioma [15]. Therefore, as BCL‑2‑mediated resistance to intrinsic apoptosis is a hallmark of malignancy, targeting the anti-apoptotic BCL‑2 proteins is an attractive therapeutic strategy in cancer.