G protein" usually refers to the membrane-associated heterotrimeric G proteins, sometimes referred to as the "large" G proteins (as opposed to the subclass of smaller, monomeric small GTPases). These proteins are activated by G protein-coupled receptors and are made up of alpha (α), beta (β) and gamma (γ) subunits, the latter two referred to as the beta-gamma complex.

Guanine nucleotide binding proteins (G proteins) are membrane-associated, heterotrimeric proteins composed of three subunits: alpha, beta, and gamma. G proteins and their receptors (GPCRs) form one of the most prevalent signaling systems in mammalian cells, regulating systems as diverse as sensory perception, cell growth and hormonal regulation. At the cell surface, the binding of ligands such as hormones and neurotransmitters to a GPCR activates the receptor by causing a conformational change, which in turn activates the bound G protein on the intracellular-side of the membrane. The activated receptor promotes the exchange of bound GDP for GTP on the G protein alpha subunit. GTP binding changes the conformation of switch regions within the alpha subunit, which allows the bound trimeric G protein (inactive) to be released from the receptor, and to dissociate into active alpha subunit (GTP-bound) and beta/gamma dimer. The alpha subunit and the beta/gamma dimer go on to activate distinct downstream effectors, such as adenylyl cyclase, phosphodiesterases, phospholipase C, and ion channels. 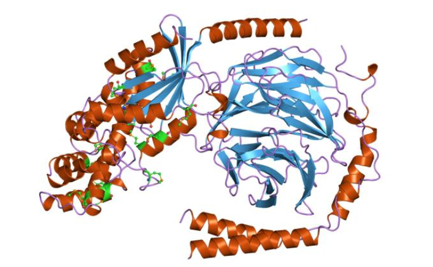 These effectors in turn regulate the intracellular concentrations of secondary messengers, such as cAMP, diacylglycerol, sodium or calcium cations, which ultimately lead to a physiological response, usually via the downstream regulation of gene transcription. The cycle is completed by the hydrolysis of alpha subunit-bound GTP to GDP, resulting in the re-association of the alpha and beta/gamma subunits and their binding to the receptor, which terminates the signal. The length of the G protein signal is controlled by the duration of the GTP-bound alpha subunit, which can be regulated by RGS (regulator of G protein signaling) proteins or by covalent modifications.

The G beta-gamma complex (Gβγ) is a tightly bound dimeric protein complex, composed of one Gβ and one Gγ subunit, and is a component of heterotrimeric G proteins. Heterotrimeric G proteins, also called guanosine nucleotide-binding proteins, consist of three subunits, called alpha, beta, and gamma subunits, or Gα, Gβ, and Gγ. When a G protein-coupled receptor (GPCR) is activated, Gα dissociates from Gβγ, allowing both subunits to perform their respective downstream signaling effects. One of the major functions of Gβγ is the inhibition of the Gα subunit. The Gβγ subunit is a dimer composed of two polypeptides, however it acts functionally as a monomer, as the individual subunits do not separate, and have not been found to function independently. The Gβ subunit is a member of the β-propellor family of proteins, which typically possess 4-8 antiparallel β-sheets arranged in the shape of a propeller. Gβ contains a 7 bladed β-propeller, each blade arranged around a central axis and composed of 4 antiparallel β-sheets. The amino acid sequence contains 7 WD repeat motifs of about 40 amino acids, each highly conserved and possessing the Trp-Asp dipeptide that gives the repeat its name. The Gγ subunit is considerably smaller than Gβ, and is unstable on its own, requiring interaction with Gβ to fold, explaining the close association of the dimer. In the Gβγ dimer, the Gγ subunit wraps around the outside of Gβ, interacting through 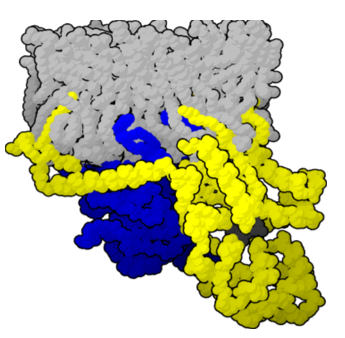 Figure 2. This heterotrimeric G protein is illustrated with its theoretical lipid anchors. GDP is black. Alpha chain is yellow. Beta-gamma complex is blue. Membrane is Grey.

hydrophobic associations, and exhibits no tertiary interactions with itself. The N terminus helical domains of the two subunits form a coiled coil with one another that typically extends away from the core of the dimer. To date, 5 β-subunit and 11 γ-subunit genes and have been identified in mammals. The Gβ genes have very similar sequences, while significantly greater variation is seen in the Gγ genes, indicating that the functional specificity of the Gβγ dimer may be dependent on the type of Gγ subunit involved. Of additional structural interest is the discovery of a so-called “hotspot” present on the surface of the Gβγ dimer; a specific site of the protein that binds to diverse range of peptides and is thought to be a contributing factor in the ability of Gβγ to interact with a wide variety of effectors.

The free Gβγ complex can act as a signaling molecule itself, by activating other second messengers or by gating ion channels directly. For example, the Gβγ complex, when bound to histamine receptors, can activate phospholipase A2. Gβγ complexes bound to muscarinic acetylcholine receptors, on the other hand, directly open G protein-coupled inward rectifying potassium channels (GIRKs). They can also activate L-type calcium channels, as in H3 receptor pharmacology.