Cytochrome is an electron transfer protein with iron porphyrin (or heme) as a prosthetic group, and is widely involved in redox reactions of animals, plants, yeasts, aerobic bacteria, anaerobic photosynthetic bacteria, and so on. The way in which cytochrome acts as an electron carrier to transfer electrons is through a reversible change between the reduced state (Fe2+) and the oxidized state (Fe3+) of the iron atom in its heme prosthetic group. Any type of cellular protein (heme protein) plays an extremely important role in cellular energy transfer.

The porphyrin ring is bonded to the iron atom by four coordinate bonds to form a tetraligand chelated complex, generally referred to as heme. Cytochromes can be classified into categories a, b, c and d depending on the structure of the heme prosthetic group.

The structure of a type of cytochrome prosthetic group is heme A, which differs from the original heme in that the form of the porphyrin ring is replaced by a formyl group instead of a methyl group, and the second place is replaced by a hydroxy-farnesyl group

The prosthetic group of the b-type cytochrome is the protohemoglobin, iron-protoporphyrin IX. The side chain substituent on the porphyrin ring is 4 methyl groups, and the two vinyl groups and the two propionate groups have the same structure as the hemoglobin and myoglobin.

Class d cytochromes are only found in bacteria, and their prosthetic group is iron dihydroporphyrin, which is different from other cytochromes.

The cytochrome complex or cyt c is a small hemoglobin that is loosely associated with the mitochondrial inner membrane. It belongs to the cytochrome c family of proteins. Unlike other cytochromes, cytochrome c is highly water soluble and is an important component of the electron transport chain, carrying an electron in it. When its iron atom is converted between the ferrous and iron forms, it is capable of oxidation and reduction, but does not combine with oxygen. It transfers electrons between complex III (Coenzyme Q - Cyt C reductase) and IV (Cyt C oxidase). In humans, cytochrome c is encoded by the CYCS gene 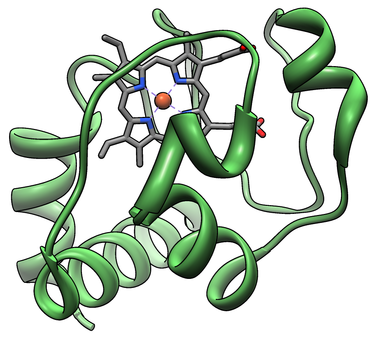 Cytochrome c is a component of the electron transport chain in mitochondria. The heme group of cytochrome c accepts electrons from the bcl complex and transfers electrons to complex IV. Cytochrome c is also involved in the initiation of apoptosis. When cytochrome c is released into the cytoplasm, the protein binds to apoptotic protease activator-1 (Apaf-1). Cytochrome c can also catalyze some redox reactions, such as hydroxylation and aromatic oxidation, and through various electron donors (eg, 2,2-azidobis (3-ethylbenzothiazoline-6-sulfonic acid) (ABTS), oxidation of 2-) shows peroxidase activity. Keto-4-thiomethylbutyric acid and 4-aminoantipyrine. 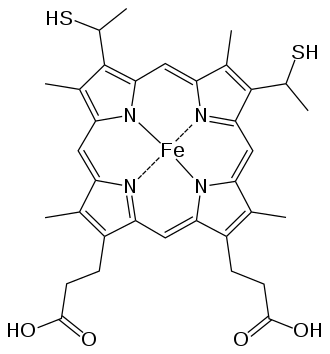 Cytochrome c binds to cardiolipin on the inner mitochondrial membrane, anchoring its presence and preventing its release from mitochondria and triggering apoptosis. Although the initial attraction between cardiolipin and cytochrome c is electrostatic due to the strong positive charge on cytochrome c, the final interaction is hydrophobic, in which the hydrophobic tail from cardiolipin inserts itself into the cytochrome the hydrophobic portion of c. In the early stages of apoptosis, the production of mitochondrial ROS is stimulated, and cardiolipin is oxidized by the peroxidase function of the cardiolipin-cytochrome c complex. The blood protein is then separated from the mitochondrial inner membrane and can be extruded into the soluble cytoplasm through the pores in the outer membrane. Cyt c is released from the mitochondria before the calcium level continues to rise. The release of a small amount of Cyt c results in interaction with the IP3 receptor (IP3R) on the endoplasmic reticulum (ER), resulting in ER calcium release. An overall increase in calcium triggers a large release of cyt c and then acts in a positive feedback loop to maintain ER calcium release via IP3R. This explains how ER calcium release reaches cytotoxic levels. This release of cytochrome c in turn activates the cysteine ​​protease caspase 9. Caspase 9 can then continue to activate caspase 3 and caspase 7, which are responsible for destroying cells from within.

As an antioxidative enzyme