Forkhead transcription factors represent an important family of proteins, for which more than 2000 family members have been identified so far, 26 of which can be found in humans. FOX genes exhibit many important functions in both development and adult life. Therefore, it is not surprising that alterations in these genes can cause of a broad range of developmental diseases and cancer. Today, 13 FOX genes are associated with developmental disorders. Mutations in five of them (FOXC1, FOXC2, FOXD3, FOXE3 and FOXL2) lead to an ocular phenotype, while mutations in three genes (FOXG1, FOXP1 and FOXP2) are a known cause for neurodevelopmental disorders, mutations in two (FOXL2 and FOXO3A) are associated with premature ovarian failure and mutation in other two genes (FOXN1 and FOXP3) are involved in immunodeficiency syndromes. Finally, FOXF1 mutations cause a lung development disorder.

The story of the forkhead (FOX) transcription factors starts in 1989, when Weigel et al. (1989) described the forkhead gene and the deoxyribonucleic acid (DNA)- binding forkhead domain (FHD) in Drosophila melanogaster. The gene is involved in correct formation of the two terminal segments and nuclear localisation suggested a role as transcriptional regulator. One year later, the same group identified the hnf-3 gene in rat, which had a 110-amino acid DNA-binding domain that was almost perfectly identical to the FHD. Nowadays, more than 2000 forkhead genes have been identified in more than 100 species. Kaestner et al. (2000) proposed a unified nomenclature for all forkhead transcription factors on the basis of a phylogenetic analysis. The root symbol Fox is used for every gene carrying the forkhead box, the following letter describes the phylogenetic subfamily and within a subfamily a specific gene is identified by a number. In general, FOX transcription factor genes can be found throughout the whole genome. However, some clustering exists; in humans, 26 forkhead genes are part of 8 clusters. This clustering gives an idea of the evolution of the genes (Figure 1). 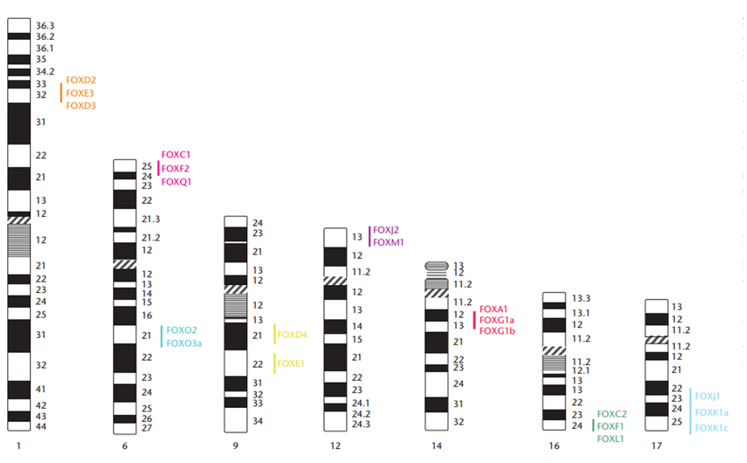 Figure 1. Overview of the forkhead gene clustering. In total, 21 of the 26 human forkhead genes are organised in 8 clusters. (Carlsson and Mahlapuu, 2002).

Given their involvement in development and various signalling pathways, it is not surprising that mutations in forkhead genes result in distinct and severe phenotypes. Owing to extensive analysis of mutant phenotypes in mice, several forkhead genes could be associated with developmental disorders in humans when mutated. Table 1 summarises the different hereditary conditions caused by mutation or deregulation of FOX genes. Remarkably, an ocular phenotype occurs in 5 out of 13 genes (FOXC1, FOXC2, FOXD3, FOXE3 and FOXL2). Other manifestations involve the immune system, skeletal and craniofacial abnormalities and circulatory defects. Apart from their involvement in developmental disorders, dysregulation of FOX genes are associated with cancer.