Cytokines are regulatory molecules that coordinate immune responses. The most typical cytokine receptor is a protein that forms a stable association with a cytoplasmic tyrosine kinase known as a Janus Kinase, or JAK, for short. The Janus kinase/signal transducers and activators of transcription (JAK/STAT) pathway are one of a handful of pleiotropic cascades used to transduce a multitude of signals for development and homeostasis in animals. This type of signaling is a direct and rapid way to turn on a set of genes. JAK activation stimulates cell proliferation, differentiation, cell migration and apoptosis. These cellular events are critical to hematopoiesis, immune development, mammary gland development and lactation, adipogenesis, sexually dimorphic growth and other processes.

Janus kinases (JAKs) represent a discovered family of protein tyrosine kinase (PTK), which is non-receptor protein tyrosine kinases of approximately 130 kDa, comprising of JAK1, JAK2, JAK3, and TYK2 (non-receptor Protein Tyrosine Kinase-2). They appear to be associated with the cytoplasmic domain of many cytokine receptors but remain catalytically inactive until binding of the cytokine to the receptor.

STAT stands for ‘signal transducers and activators of transcription’. STATs are latent cytoplasmic transcription factors that become activated after recruitment to an activated receptor complex. "Latent" means that they are always present in the cytoplasm, and waiting to be activated by JAK. As the name suggests, these proteins (a) form an integral part of cytoplasmic signal transduction initiated by certain regulatory molecules and (b) activate transcription of specific genes in the nucleus. Notably, there are a number of different STAT proteins in cells, at least six distinct mammalian STATs (STAT 1–STAT 6) have been identified, in size ranging from 84–113 kDa, and activation of different cytokine receptors will result in the formation of different STAT dimers. Each STAT dimer binds to a specific DNA sequence found in the promoters of certain genes. In this way, each cytokine activates a specific set of genes to cause a specific response in the cell.

The JAK is activated when the regulatory molecule, usually cytokines, such as interferon, interleukin, and growth factors, binds and brings two receptor molecules together to form a dimer. Receptor dimerization brings the two JAKs into close proximity, where they can phosphorylate each other. Phosphorylation further activates JAK, allowing it to phosphorylate the receptor. 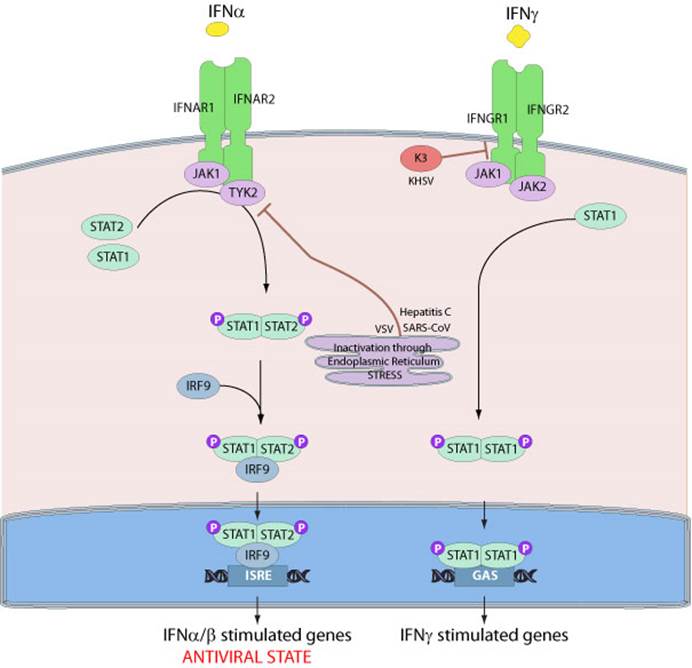 When STAT binds to the receptor that brings it into a position where it can be phosphorylated by JAK. Once phosphorylated, two STATs can then form a STAT dimer (each STAT molecule binds to the phosphotyrosine of the other phosphorylated STAT). The STAT dimer is an active transcription factor. It travels to the nucleus where it binds to specific sequences in the DNA. STATs bind specific sequences of DNA which approach symmetry or are palindromic (often TTCC X GGAA, where X can be different bases). These sequences are normally present in upstream regulatory regions of specific genes. Binding of the STAT complex enhances transcription of these genes, and the gene products mediate the observed cellular response to cytokine binding.  Inactivation occurs when phosphatases remove phosphate groups from various proteins in the signaling pathway.

The pathway is negatively regulated on multiple levels. Protein tyrosine phosphatasesremove phosphates from cytokine receptors and activated STATs. More recently identified suppressors of cytokine signalling (SOCS) inhibit STAT phosphorylation by binding and inhibiting JAKs or competing with STATs for phosphotyrosine binding sites on cytokine receptors. STATs are also negatively regulated by protein inhibitors of activated STAT (PIAS), which act in the nucleus through several mechanisms. For example, PIAS1 and PIAS3 inhibit transcriptional activation by STAT1 and STAT3, respectively by binding and blocking access to the DNA sequences they recognize.

Type I interferons bind to the IFN-α / β receptors to phosphorylate and activate two members of the JAK family: Tyk2 and JAK1. These kinases further phosphorylate STAT1α (STAT91), STAT1β (STAT84) and STAT2 (STAT113). These three activated STATs disengage from the receptor and bind to the cytoplasmic protein，p48. The complex then enters the nucleus and directly binds to the upstream regulatory regions (IFNs) of IFN-sensitive genes, thereby regulating the expression of specific genes expression. These nucleotide sequences are termed interferon-stimulated response elements (ISREs).

The essential elements of the signal transduction pathway elicited by IFN-g is even more straightforward.  IFN-γ binding to the type II receptor induces receptor dimerization with consequent activation of JAK 1 and JAK 2. The JAKs phosphorylate the receptors and subsequently bind to STAT1α. STAT1α then forms homodimers when released from receptors and translocates into the nucleus. It can regulate IFN-γ-sensitive genes expression by binding to a specific upstream regulatory region GAS. The PIAS-1 protein is an inhibitor of this signaling pathway, which binds to phosphorylated STAT1, inhibiting DNA binding and activation.

The JAK/STAT Pathway in Disease

Defects in the pathway often result from genetic mutations that inactivate a JAK/STAT molecule. Alternatively, mutations in the JAK structure can also give rise to a kinase that is constitutively active.

Several inactivating point mutations in the human Jak3 gene have been shown to cause severe combined immunodeficiency (SCID) due to the absence of common gamma chain – family cytokine signaling. For example, two separate findings demonstrate that autosomal recessive TYK2 mutations can result in atopic dermatitis, elevated IgE, and bacterial/viral infections; also severe infections after vaccination have been reported. The roles of overly active JAK kinases have become evident in myeloproliferative diseases and hematological cancers.

Some of the STAT transcription factor genes have also been reported to possess loss and gain-of-function mutations. Inactivating mutations in the STAT1 and STAT5B genes result in the disruption of cytokine signaling by interferons and other immune-regulatory cytokines, and carriers suffer from infections and even immune-deficiencies. Polymorphisms in the regulatory regions of STAT genes have been linked with multiple immunological diseases.