Interferons (IFNs) are a group of signaling proteins made and released by host cells in response to the presence of several pathogens, such as viruses, bacteria, parasites, and also tumor cells. Interferons (IFNs) were discovered earliest of cytokines. In 1957, researchers observed that these cells quickly gained viral resistance if susceptible animal cells were exposed to a colonizing viral environment. This resistance was caused by the substances secreted by the infected cells, which were named "interferons." Subsequently study found that most species can produce a variety of interferons, and the human body can produce at least three distinct interferons, IFN-α，IFN-β and IFN-γ. These interferons are produced by a variety of different cell types and exhibit a wide range of biological effects including:

No interferon can achieve all of the above bioactivities, and interferons act by binding specific receptors which present in the specific cell surface.

IFN-α and IFN-β display significant amino acid sequence homology (30%), they are both acid-stable and bind to the same receptors and mediate similar biological activities. Therefore, IFN-α and IFN-β are sometimes called type I interferons, or "acid stable interferons." IFN-γ is distinctly different from other interferons, which bind to other receptors and mediate different biological activities and therefore, are often referred as type II interferons.

According to the biological activity of interferon, most of the interferons can be used for medical treatment, including:

In the 1970s, with the development of cell culture technology, the level of specific express IFNs increased. Until the advent of genetic engineering techniques, however, interferon production gradually met the need for purification and treatment. 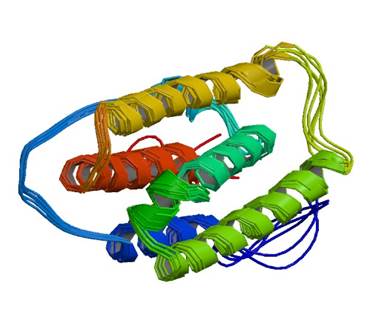 For many years, IFN-α was considered represented a single gene product, in fact, however, a variety of species can produce multiple related IFN-αs. There are at least 24 related genes in the human body, and they can express at least 16 different mature IFN-αs. Fifteen of them can be classified as type I IFN-αs and one type II.

Type I IFN-αs consist of 166 amino acids and type II IFN-αs consist of 172 amino acids. All are initially synthesized containing an additional 23 amino acid signal peptide. Isoelectric points determined by isoelectric focusing range between 5 and 6.5. Heterogeneity analysis shows that they are likely O-linked glycosylated, although most IFN-as are not glycosylated. The members of the IFN-αs exhibit more than 70% homology and are rich in leucine and glutamate. The mature IFN-αs basically contains two disulfide bonds. Their quaternary structure contains some alpha helices, but lacks beta sheets.

Each individual member of the IFN-α family has an identifying name, usually followed by a letter or a number after the ‘α’, such as IFN-αA, IFN-αB, IFN-α7, IFN-α2B. Sometimes the member has two different names, such as IFN-α7 and IFN-αJ1, they refer to the same product. 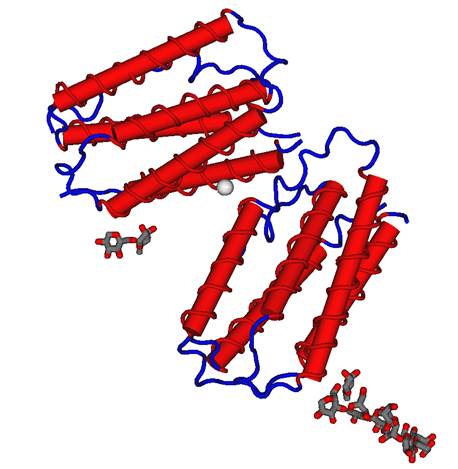 IFN-β is normally secreted by fibroblasts and is the first interferon be purified. IFN-β contains 166 amino acid residues, one disulfide bond, and its molecular weight usually exceeds 20 kDa. Its side chain is linked to aspartic acid residues by N-glycosidic bonds. The quaternary structure of IFN-β is dominated by five α-helices, three of which are parallel to each other and the other two are anti-parallel to them. 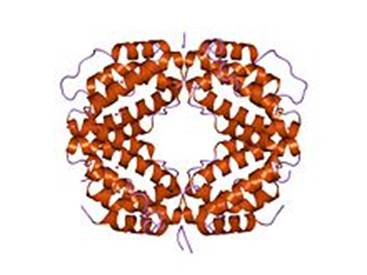 IFN-γ, commonly known as "immune" interferon, is secreted mainly by lymphocytes and was first extracted from human peripheral blood lymphocytes. IFN-γ is less homologous to type I IFN. The mature polypeptide contains 143 amino acids. The molecular weight is about 17 kDa, and will vary according on the type of glycosylation. Its quaternary structure contains six alpha helices.

The availability of large quantities of purified IFNs facilitates detailed study of the interferon receptors. Studies have revealed two type I IFN receptors. Both are transmembrane N-linked glycoproteins. One of the receptors is IFN-α / β-receptor, which could bind to all type I IFNs. The other αβ-receptor specifically binds to IFN-αB. Both receptors are present on most cell types.

The IFN-g receptor (the type II receptor) displays a more limited cellular distribution than that of the type I receptors. It is a 50 kDa glycoprotein which functions as a homodimer on the cell membrane. The extracellular region of the IFN-γ receptor consists of approximately 200 amino acids and initiation of signal transduction also requires the assistance of another transmembrane glycoprotein (AF-1, accessory factor 1).

The intracellular events triggered upon binding of type I or II IFNs to their respective receptors are quite similar and all are the JAK-STAT pathway. This signal pathway has been studied quite a lot in recent years, and it occupies an important position among the signal pathways immediately. This signal pathway is not only for interferons but also for some other cytokines.